I do like a drapey jacket.  And I like a Japanese aesthetic.  Combine the two, and you get the Sencha Kimono by Pearl Red Moon. 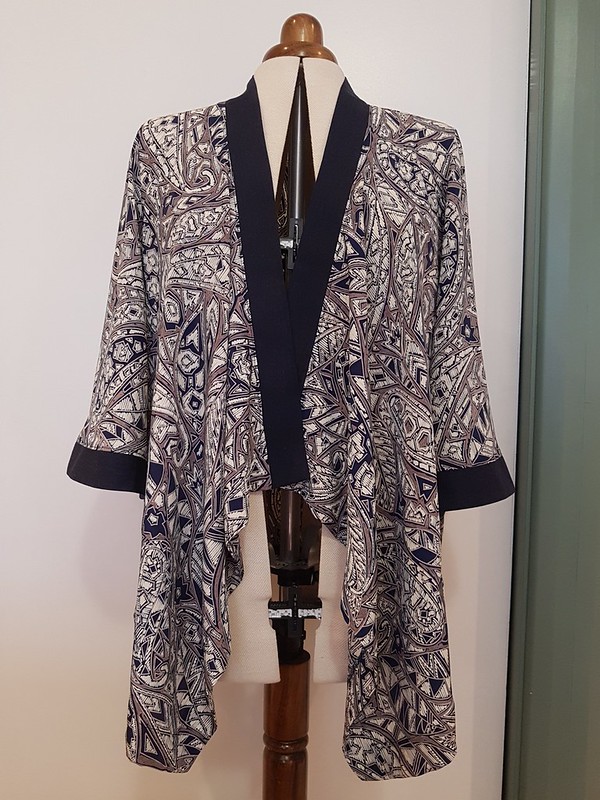 This was a bit of an impulse sew for me last week, although I’d bought, taped and cut the pattern out months and months ago. I was standing in front of the cupboard that holds my woven prints when this vintage John Kaldor print jumped out at me. I wondered if there would be enough of it for the Sencha Kimono, and there was! It was meant to be. 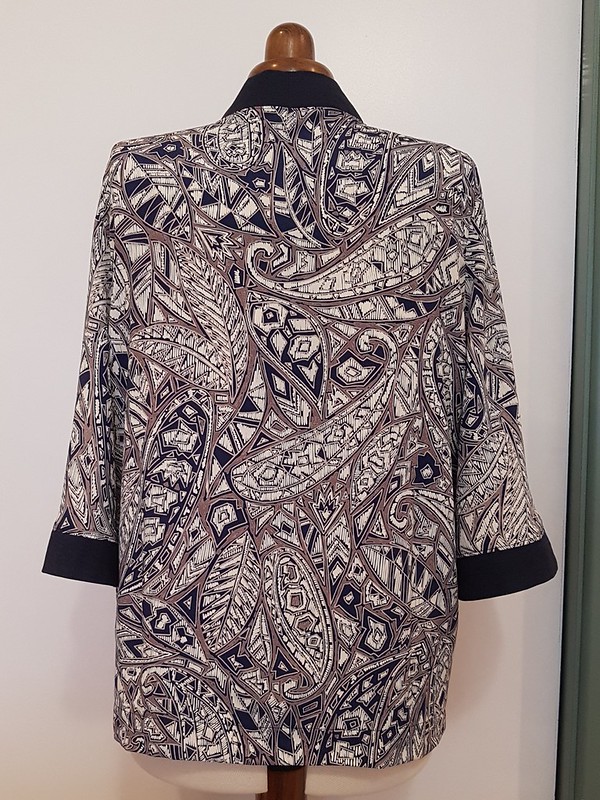 This beautiful print is on a polyester substrate, but it’s that GOOD polyester that quality prints were often found in ‘back in the day’ – especially those by John Kaldor. I suspect that this dates back to the 1980s, actually. It was really hard to tell the right and wrong sides apart, so I hope that I got it right when I sewed all the pieces together! The navy bands were sewn from scraps that were too small for a garment but large enough for exactly this purpose. 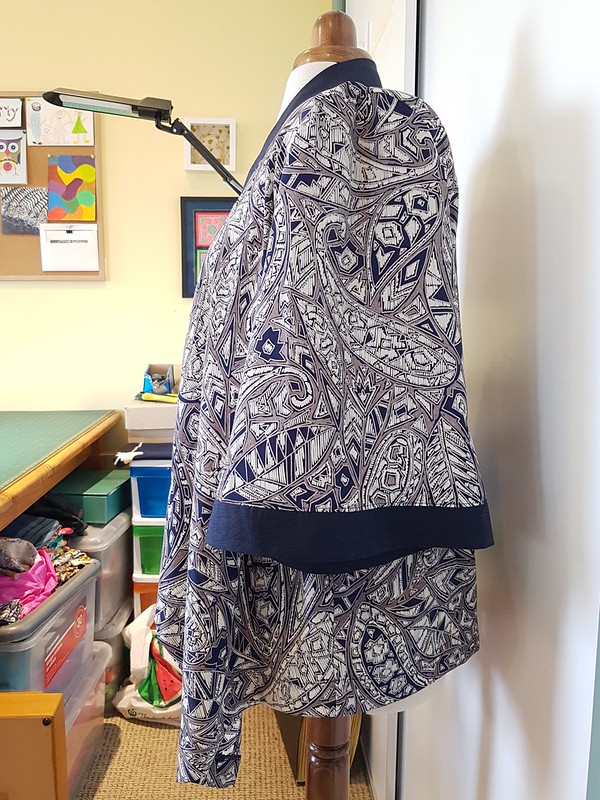 The neckbands are interfaced, but not the sleeve bands. The sleeves have a beautiful shape. I have blogged about Pearl Red Moon’s patterns before, when I sewed the Aurana top. This pattern proved itself to be equally well drafted, and straightforward to assemble. I chose to attach the doubled bands by overlocking, pressing the seam allowances toward the garment, then topstitching. Pearl does however suggest that you could attach them so that the seam allowances are completely enclosed. That’s a nice construction choice reminder. We have choices when we sew things! 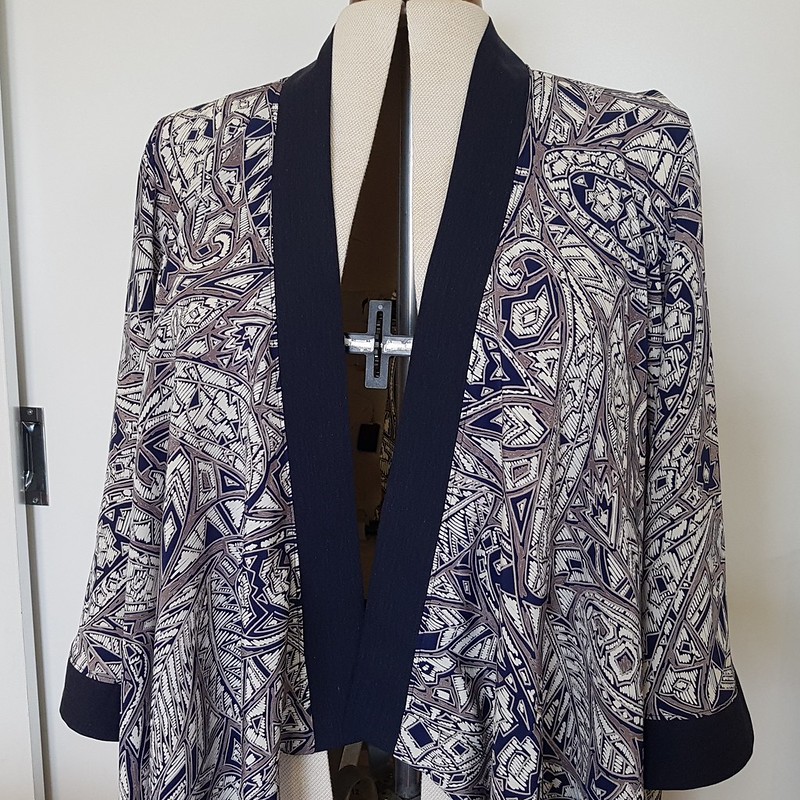 From the pattern page on Etsy: The Sencha Kimono is an unlined kimono style robe with 2 length options as a jacket or coat length version. Tulip flared sleeves are 3/4 length with hem bands. Front edges and back neck have bands. The front has no closures but drapes freely.

This pattern was actually released during a time when there was online controversary over the naming of garments as ‘kimonos’, with claims that this was cultural appropriation. Pearl wrote a number of interesting blog posts on this issue last year – they’re worth reading; I think that they are very thoughtful and well researched. She’s also written extensively on the recent proliferation of fake online stores that steal photos from blogs and instagram and use them to advertise and sell garments that can never be delivered (especially Pearl’s, as they’re all hand-made and one-off designs). 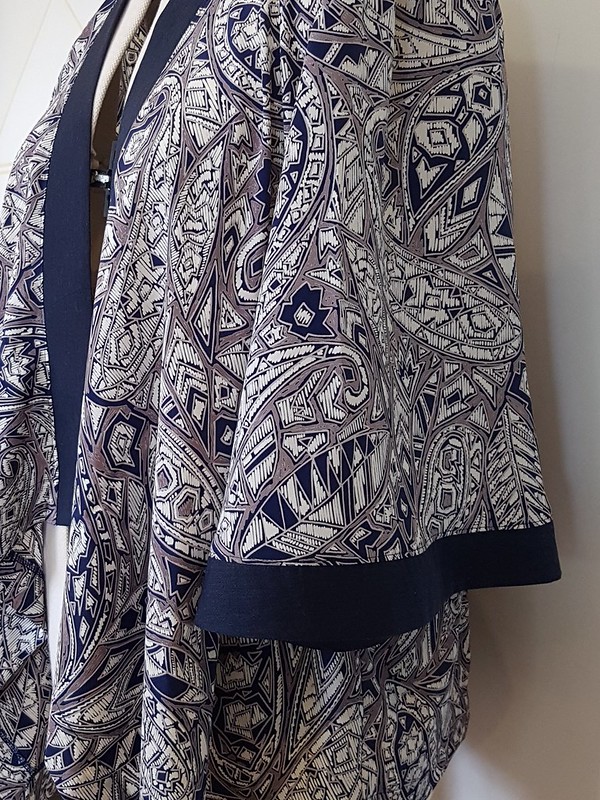 I won’t actually be wearing this jacket; it’s probably going to go to Mum as it’s a size too large for me, especially across the shoulders. The perils of using a previously taped and cut pattern from last year; I’m now smaller than I was then! However I really enjoyed sewing it, and I know that it will be enjoyed by the end wearer.