Some of you have been reading my blog for a really long time (I started it when I was pregnant with Stella – actually, my 13 year bloggiversary was in February).  You might remember that in the early days I did quite a bit of patchwork and quilting; that’s actually how I got into blogging in the first place.  I discovered Heather Bailey’s blog, asked a friend to show me how to do patchwork, then off I went!  After a couple of years I reverted mostly to garment sewing (my first love) but every now and then it’s fun to go back to cutting big bits of fabric into little pieces then sewing them back up into another big bit again. 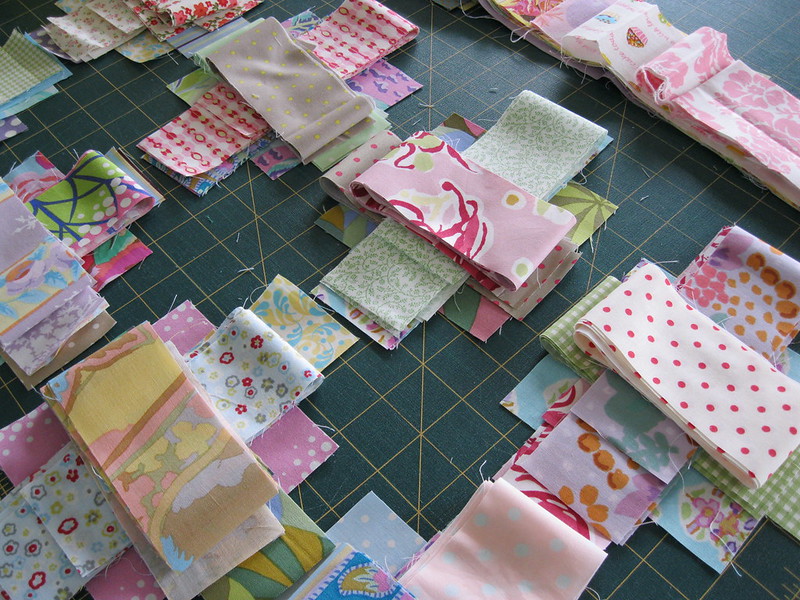 In 2009 (yes, you read that correctly) I started a Block Of the Month (BOM) project by Sue Ross, done in conjunction with Material Obsession. They sent me the pattern, templates and fabrics each month, and I constructed the block. I have to say right at the outset that this project was WAY above my skill set. Nevertheless I plugged away at it and eventually ended up with nine blocks, using a mixture of piecing and applique. I then cut out the setting strips that you see in the photo above, folded up all the pieces and set them aside some time in 2011. Last week I finally pulled them out and assembled the quilt top. 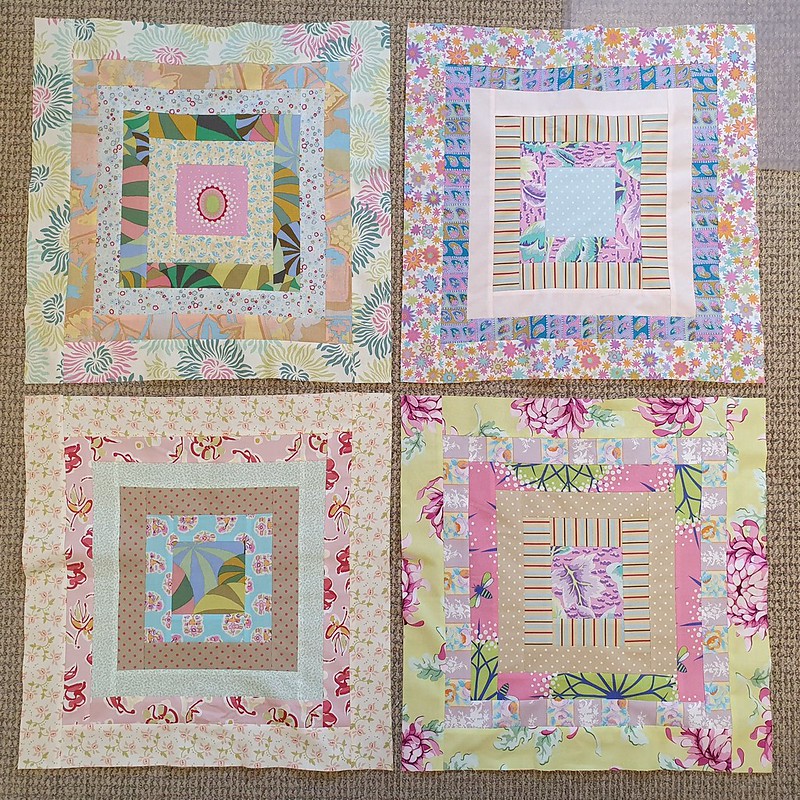 First of all I assembled the strips into log cabin blocks. Each of these blocks then needed to be cut diagonally into four triangles. 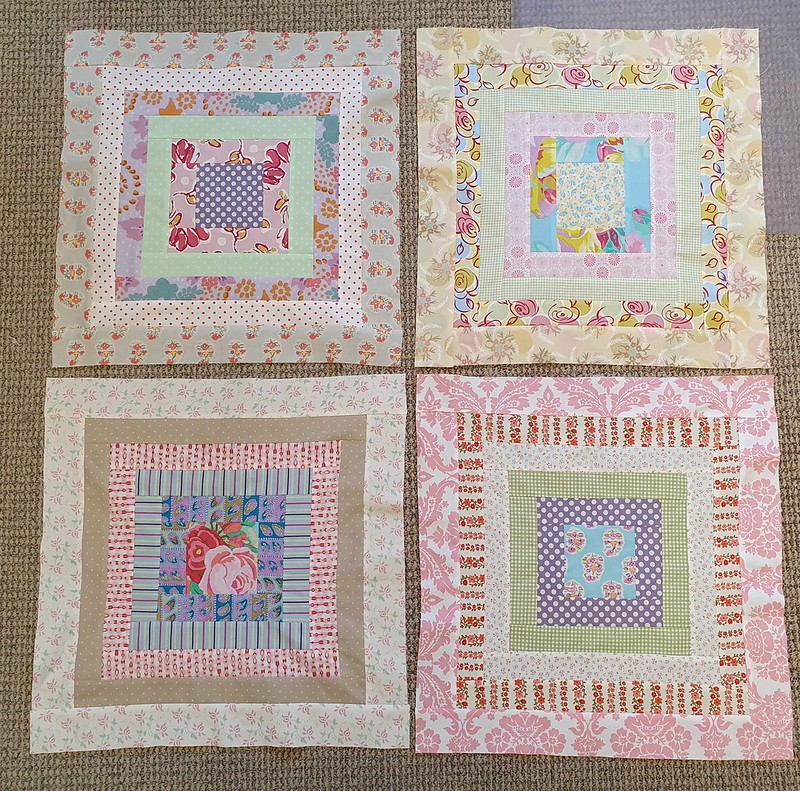 Once again, I warn the ‘real’ quilters who read my blog not to look too closely.  I tend to iron more than press; things are stretched out of shape, and points don’t all line up and match properly.  But aren’t those fabrics pretty!  Anyway, after I cut these blocks into triangles, I sewed the triangles on to each of the blocks that I had prepared earlier.  Remember, there are nine of these!  Lots of photos ahead! 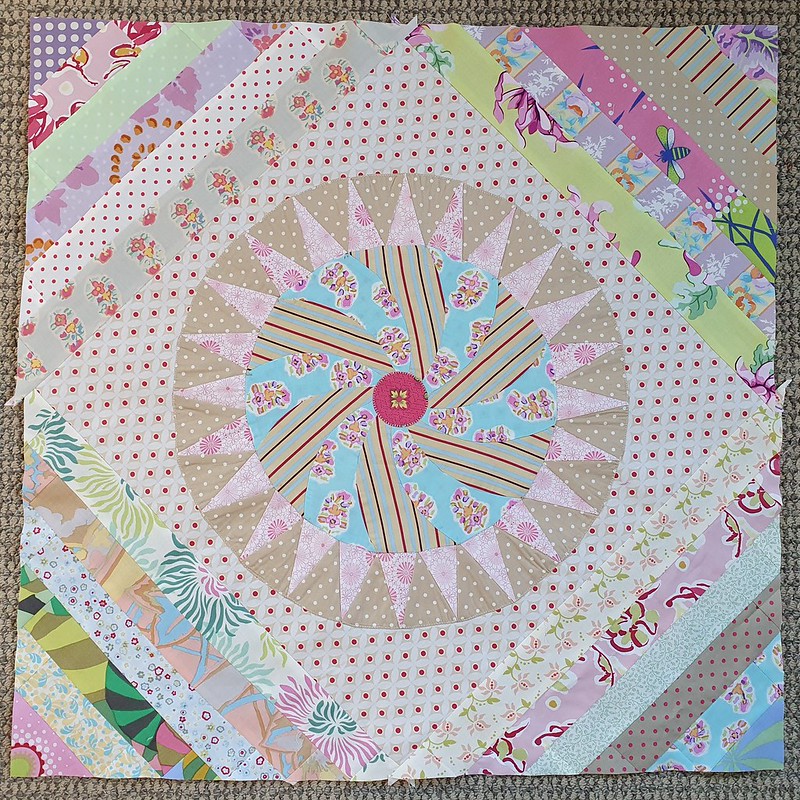 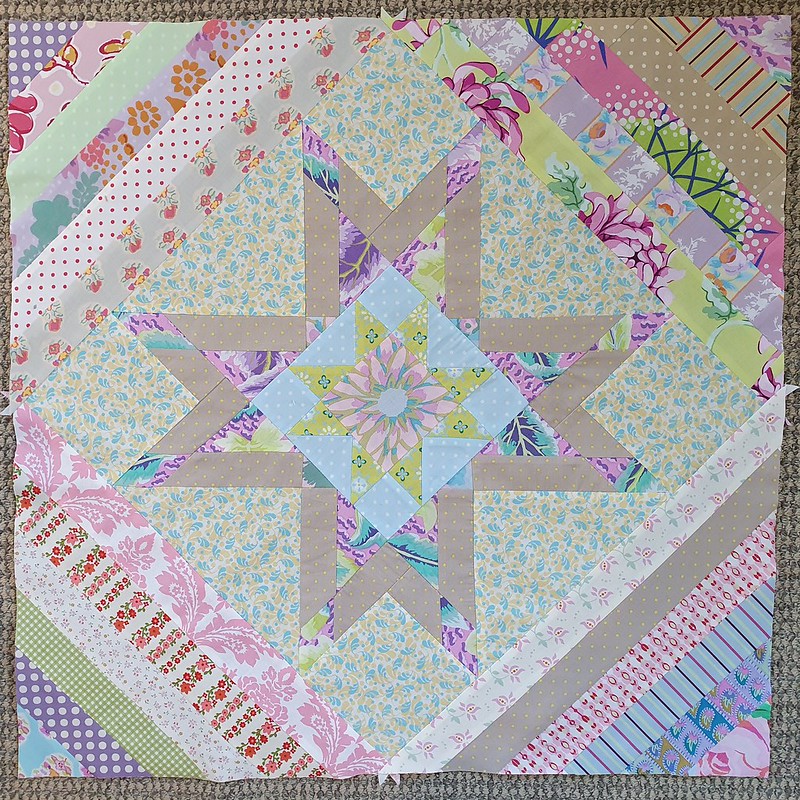 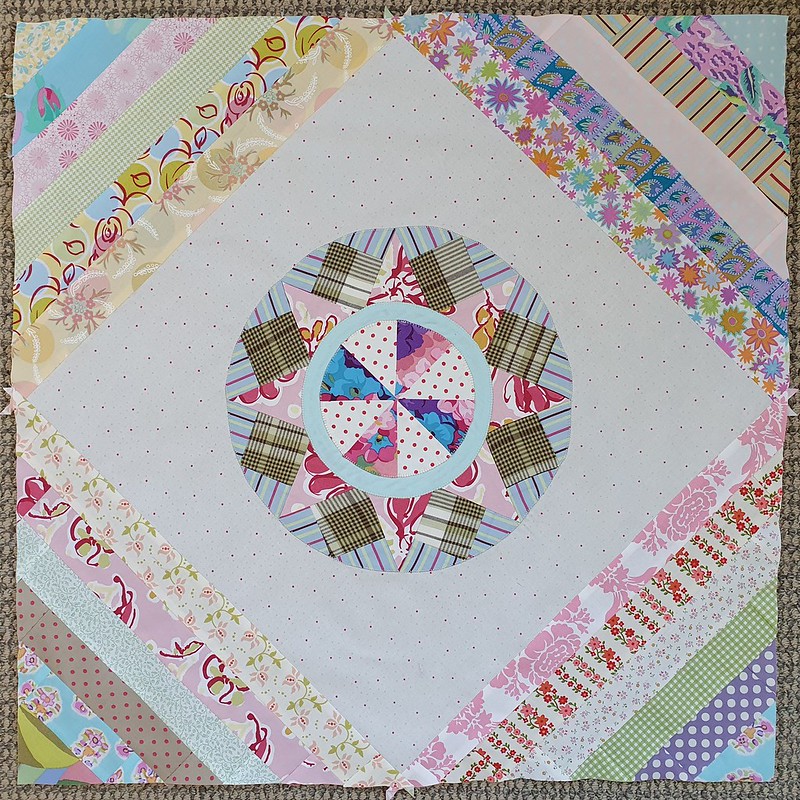 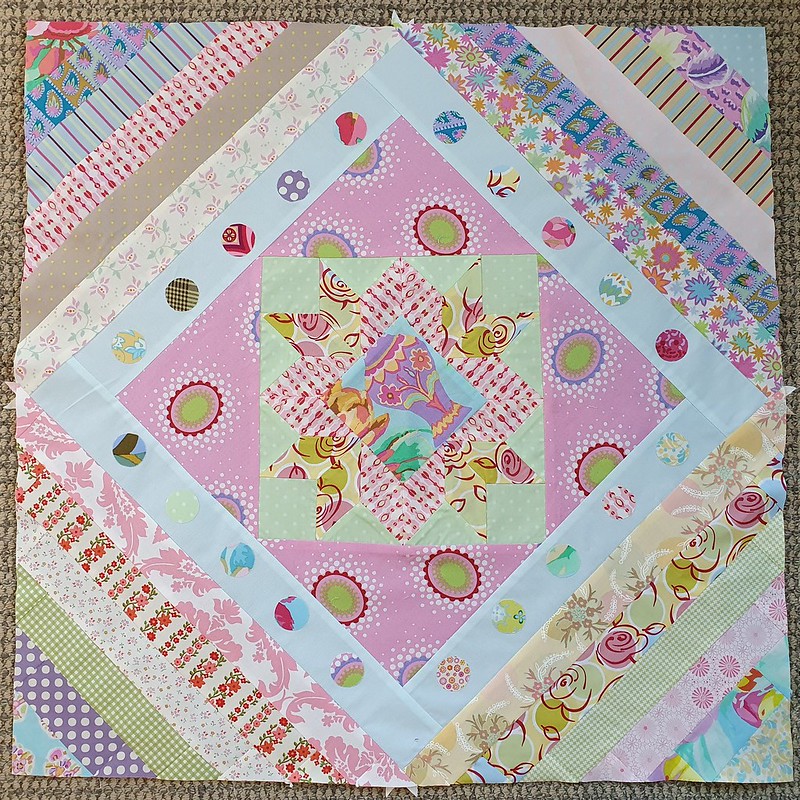 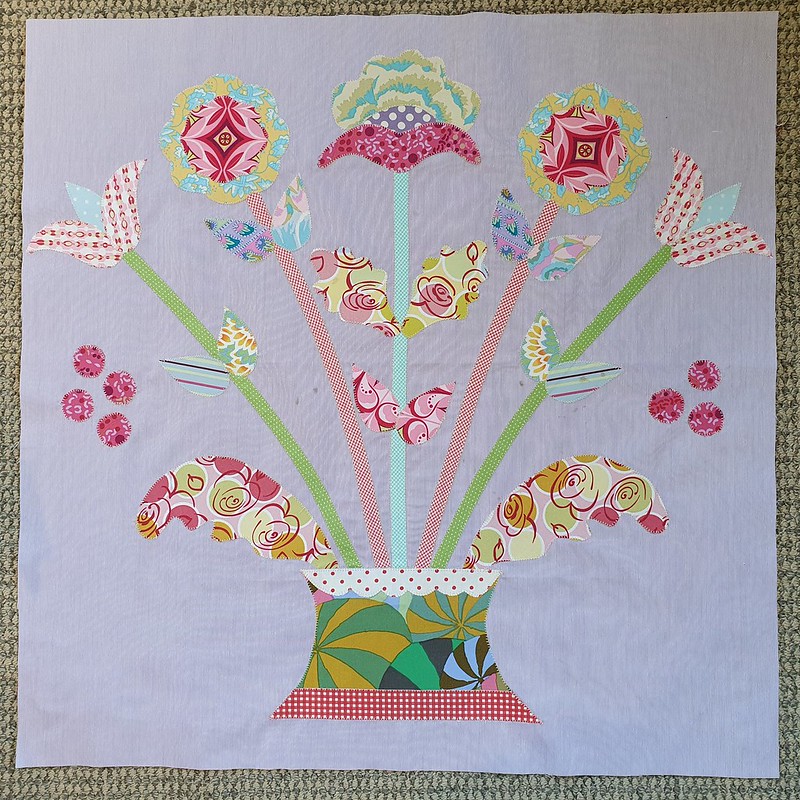 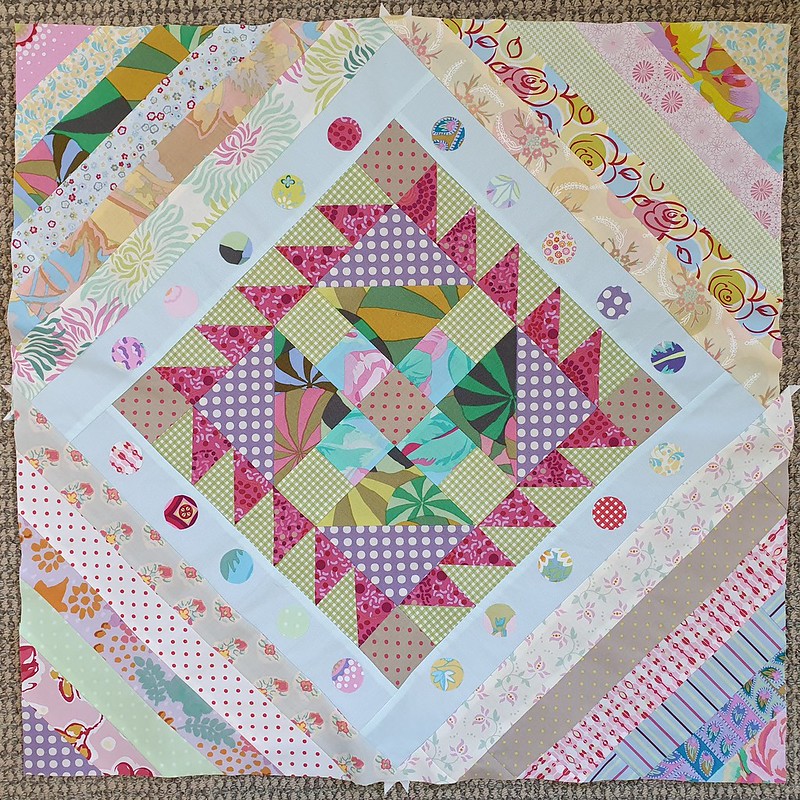 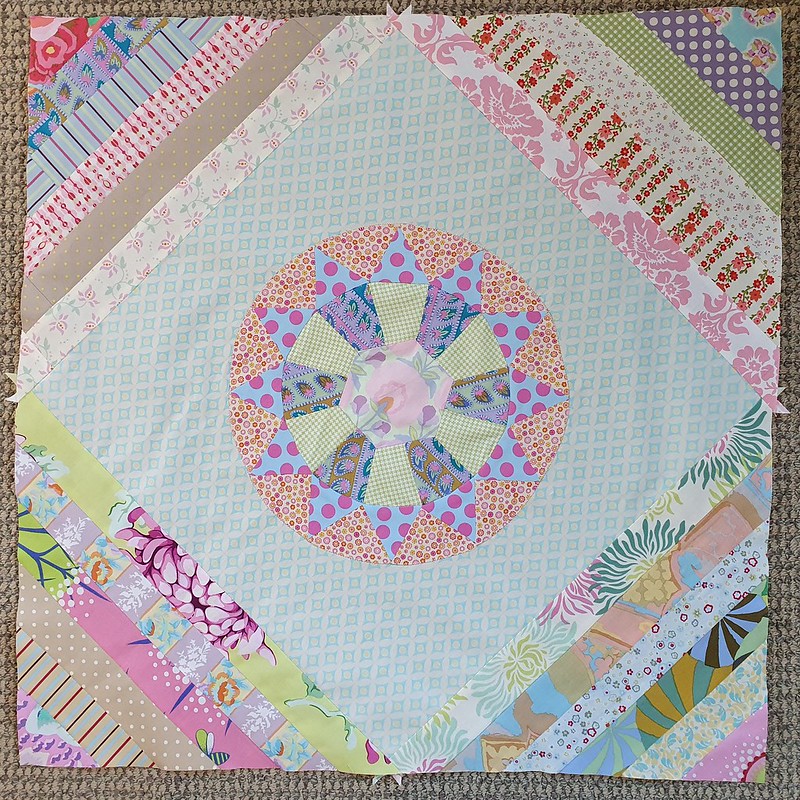 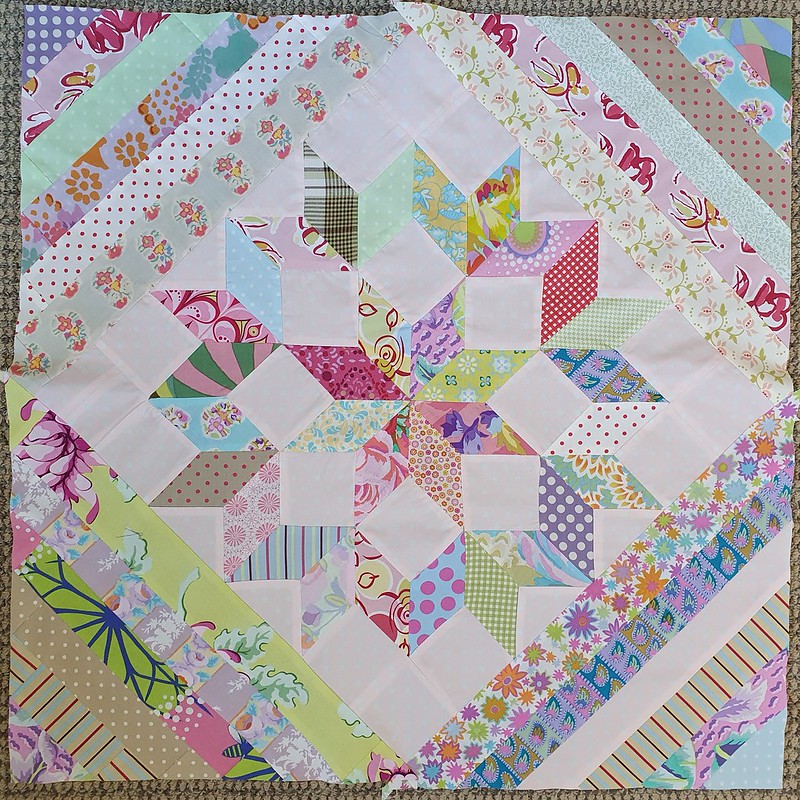 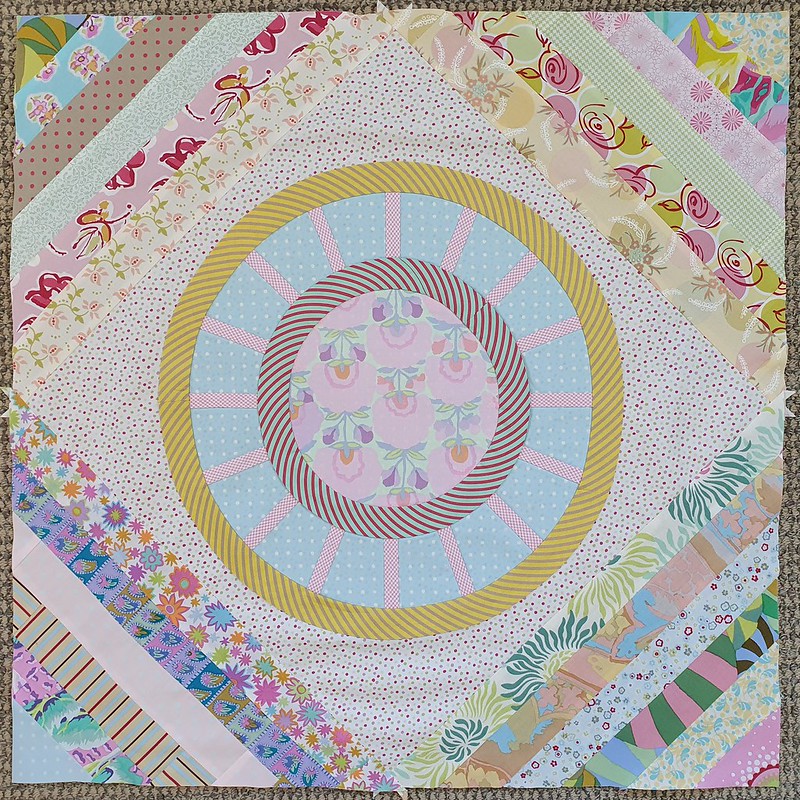 Each of those blocks is around 26 inches wide – so larger than you probably imagine when seeing them on a screen! Once they were all sewn together, I had a quilt top! Tada! 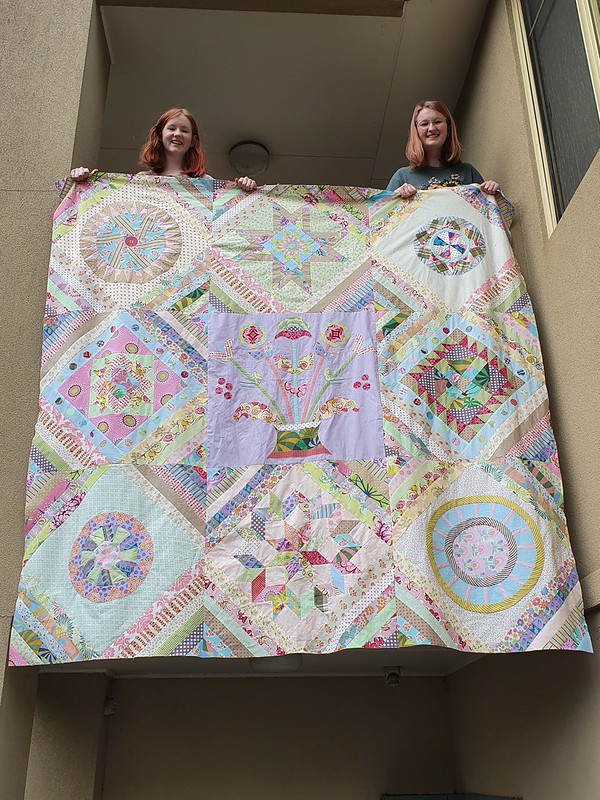 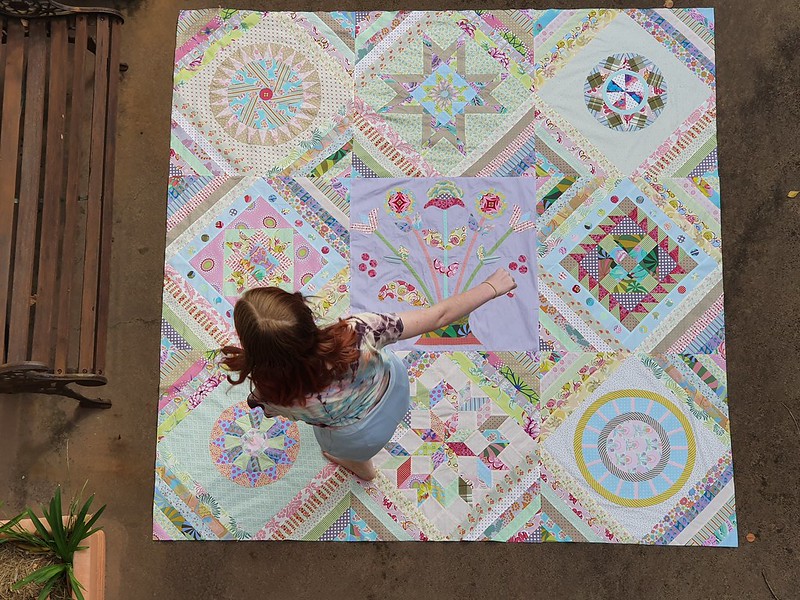 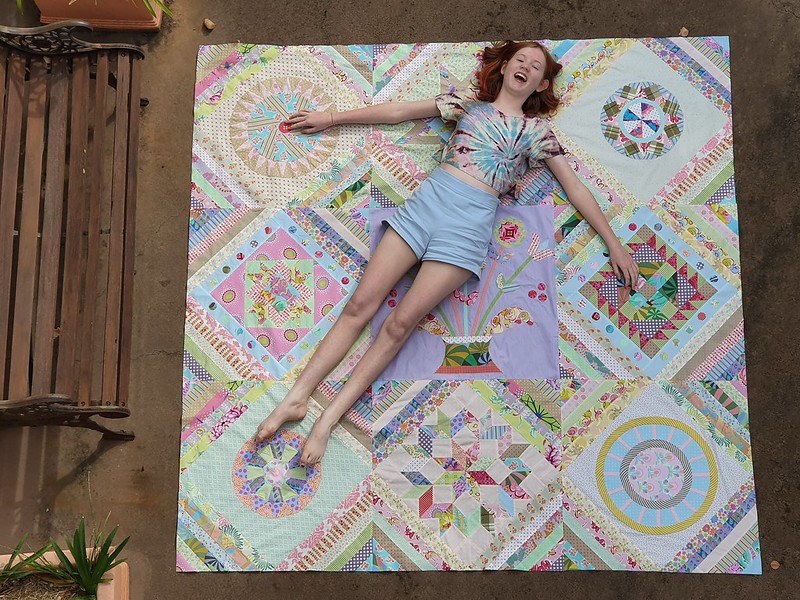 I am ridiculously pleased with this quilt top, despite it’s imperfections. I have noticed that there are a couple of bits of applique that still need to be secured, but I might do that when it’s quilted. I am still tossing up the next stage – it needs backing, wadding, basting, quilting and binding. I’d really like to do most of that myself, other than the basting part, but might also get it quilted. I figure that I’ll have enough fabric in stash to piece together for the backing. Stella is keen for me to get this finished; she also has visions of snuggling under it on the couch when watching telly and is especially pleased that it’s large enough for her sister as well. 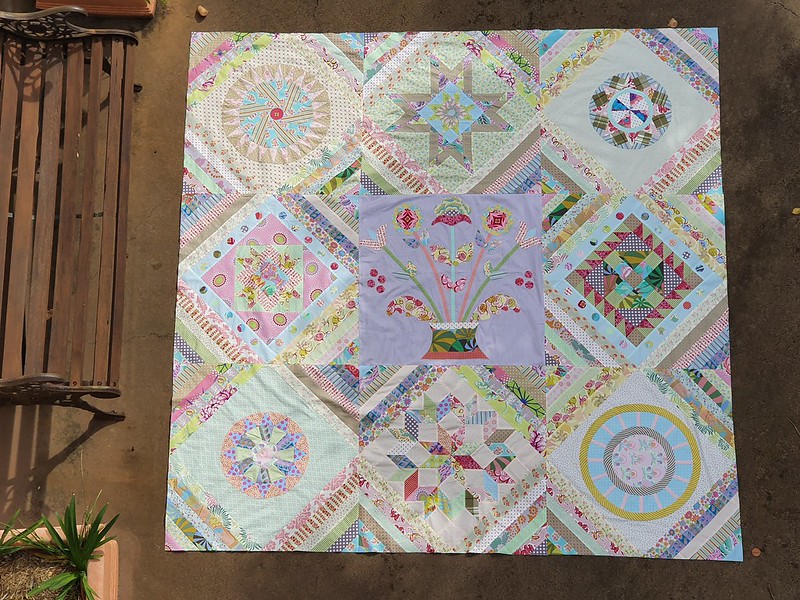 While I think about what to do with this quilt top, I have a few other quilts that need to be finished off (the tops are done and they need to be turned into quilts). I’ll do the smaller ones myself, but will probably send out the larger ones. Looks like this winter will be a great time to finish off the UFOs!