Short tiered skirts are in all the teen shops at the moment.  Every time Clare points them out, I say ‘I could sew that’.  Then I procrastinate, because I know I’ll need to figure out lengths and proportions and sometimes thinking is hard.  But as it turned out, I didn’t have to do any mental gymnastics, because (unsurprisingly) there is a tutorial for exactly the sort of skirt that Clare wanted. 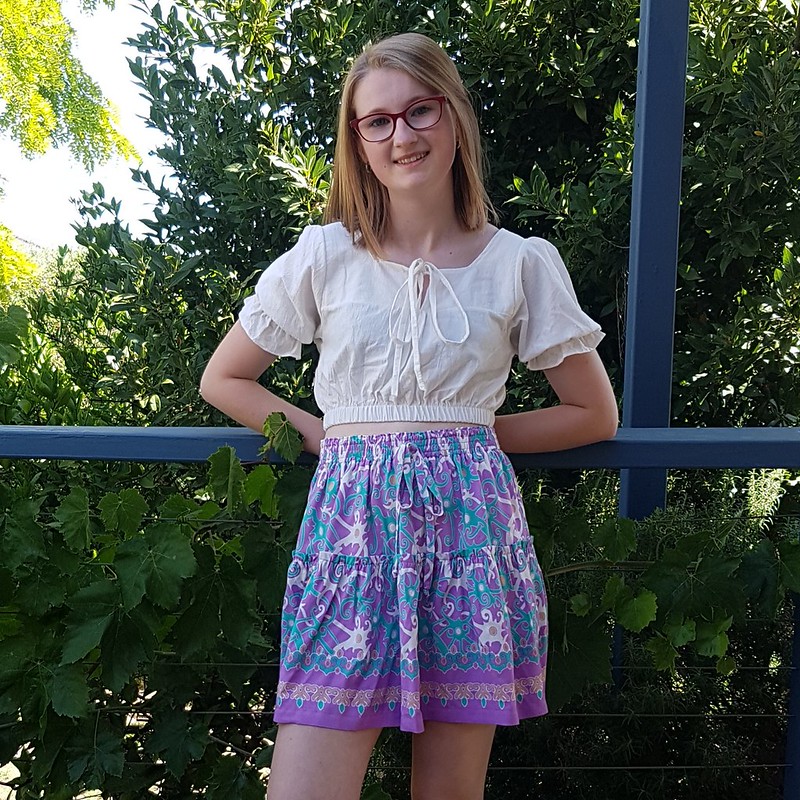 The tutorial is called the Kami Skirt, and it’s from a blog called The Hemming. She provides the measurements for Australian sizes 6 (60cm waist) to 16 (85cm waist).  I used the size 8 measurements as a guide for Clare. 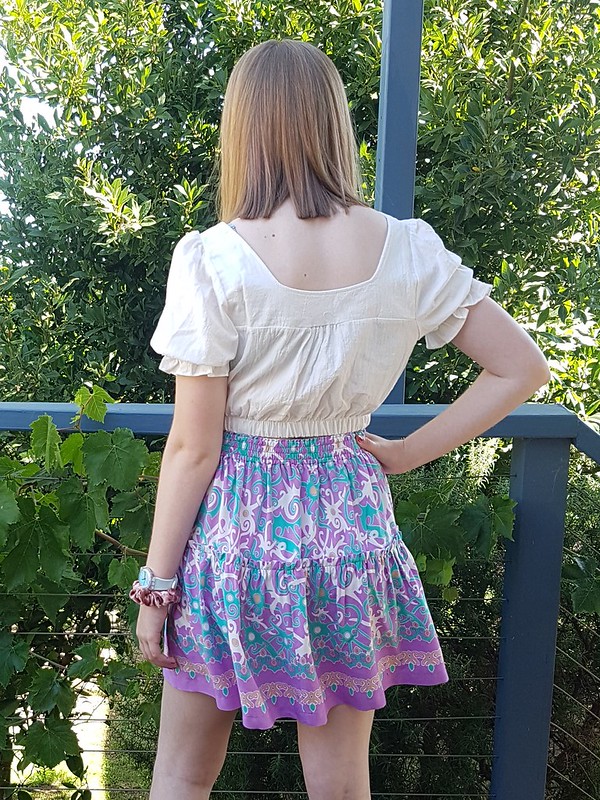 This is another Borneo souvenir garment! Clare chose this printed cotton (actually, it feels as though it has some viscose content as it’s quite soft) at Fabriko in Kuching. Once again I took advantage of the border print by cutting the lower tier on the crossgrain. I used the full length of the fabric we’d bought, which was less than the pattern suggestion, but it still worked out okay. It just means that the lower tier in Clare’s skirt is less full than that in the tutorial. Still seems to have an adequate level of twirl and swish! 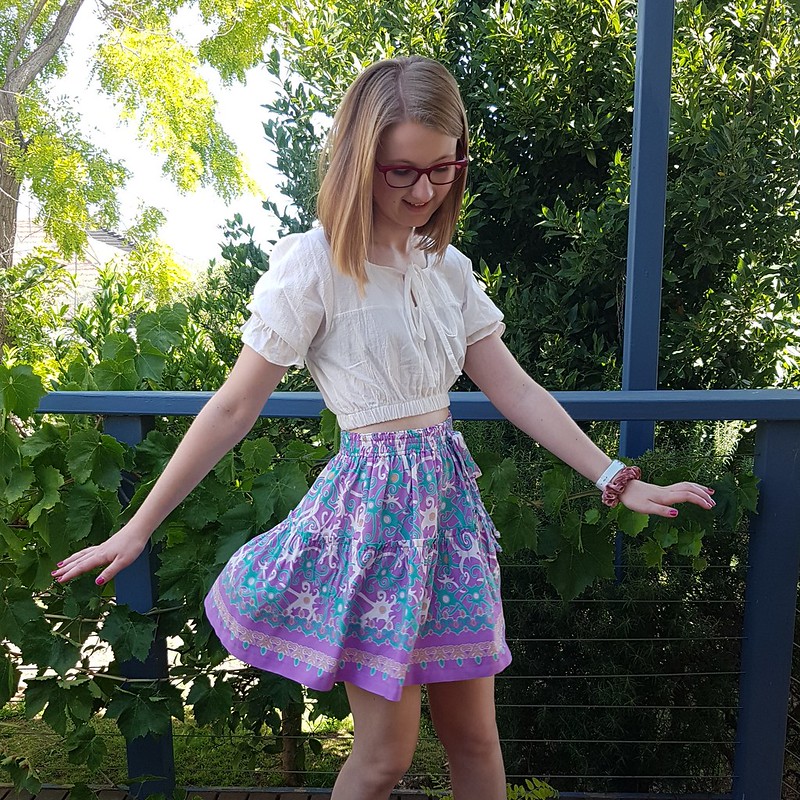 Rather than roll hemming the skirt, I chose to do folded and stitched hems. It’s always slightly awkward to attach the lower tier on the outside of the top tier to create the little frill – you need to make sure that it’s overlapped evenly right along. I’d turned a hem, so that also formed a ‘line’ that I could feel so that I could line it up evenly. 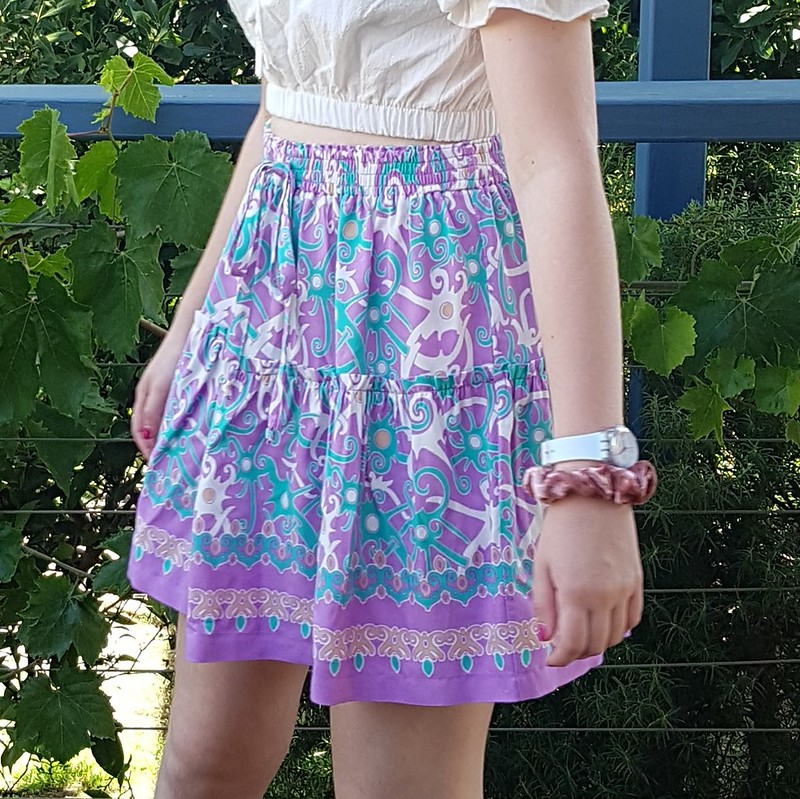 It’s one piece wide elastic in the waist, sewn through to give the appearance of three channels. The tie is just for decoration – it’s non-functional. It took me four episodes of Buffy the Vampire Slayer to cut out and sew this skirt, and I think it would be even faster to sew a second time. But how many of these skirts does a teen need in her wardrobe? I’m not sure. 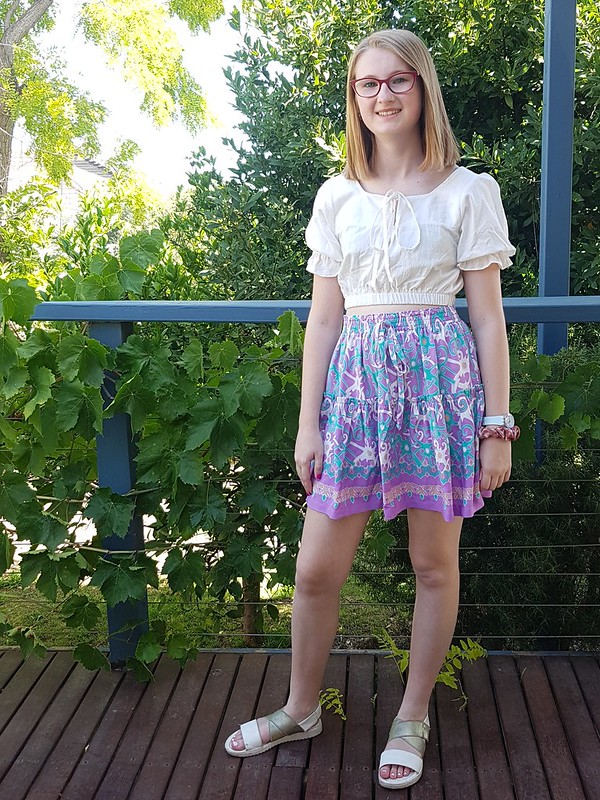 The top that she’s wearing with the skirt was bought in Kota Kinabalu, at E-teen (like Supre). I can’t claim credit for sewing the top, just the skirt.

2 thoughts on “Kami skirt for Clare”