This top got an awful lot of love when I posted it on Instagram a few days ago.  I first sewed the Tessuti Hilary top last year in printed silk, and it was one of the favourite things I’d sewn last year.  Then Tessuti posted a tutorial for a sleeve ‘hack’ (I still don’t like the term as applied to pattern alterations and modifications – they’re done carefully!) of a shorter, fuller sleeve.  Looked great!  Maybe I could do something similar? 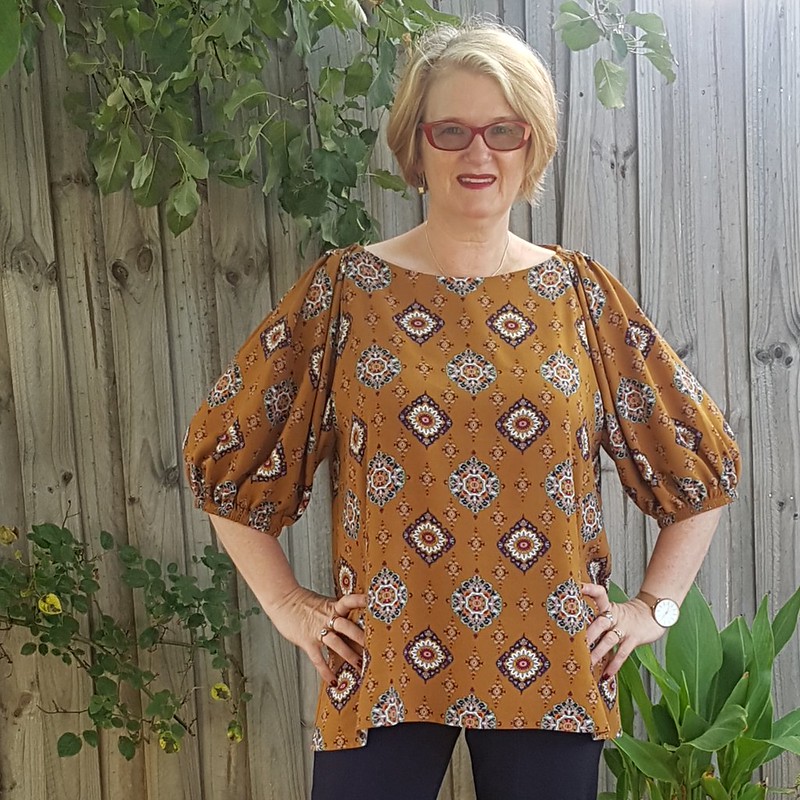 This is one of those times when I got the fabric and pattern combination just right for me. The fabric is printed rayon from Spotlight – I found it on the clearance table, so given that I’ve already used this pattern before, this garment is a very low cost garment (in terms of materials – my time is not factored in to the cost).  This type of delicate and detailed print is not one that I usually wear, but the colour was just perfect and I figured that I’d still feel like ‘me’ in it.  I knew that because I’d chosen to sew it in rayon I wouldn’t get the same ‘boofy’ sleeve as the top in Tessuti’s tutorial, but that was the look I was after. Fullness but not excessive volume. 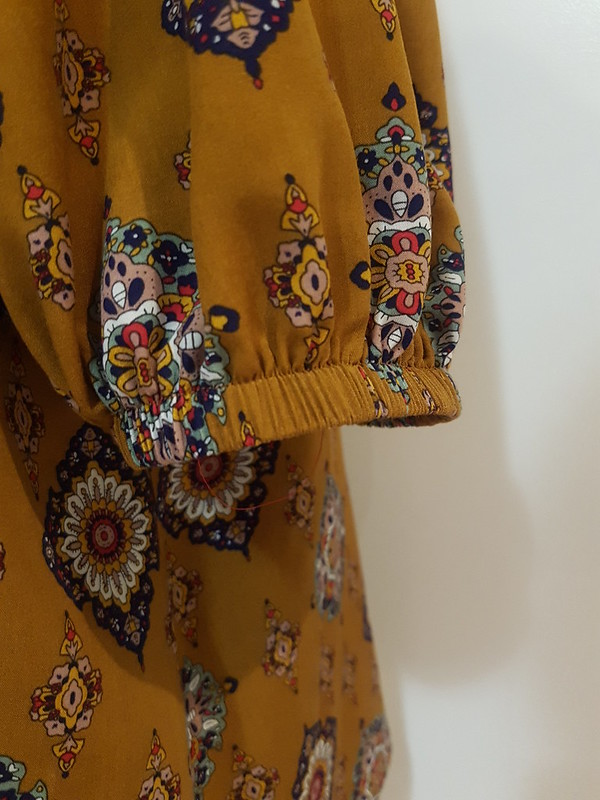 I thought that many of you might find it helpful to see the modifications that I made to the pattern pieces. Here’s the sleeve: 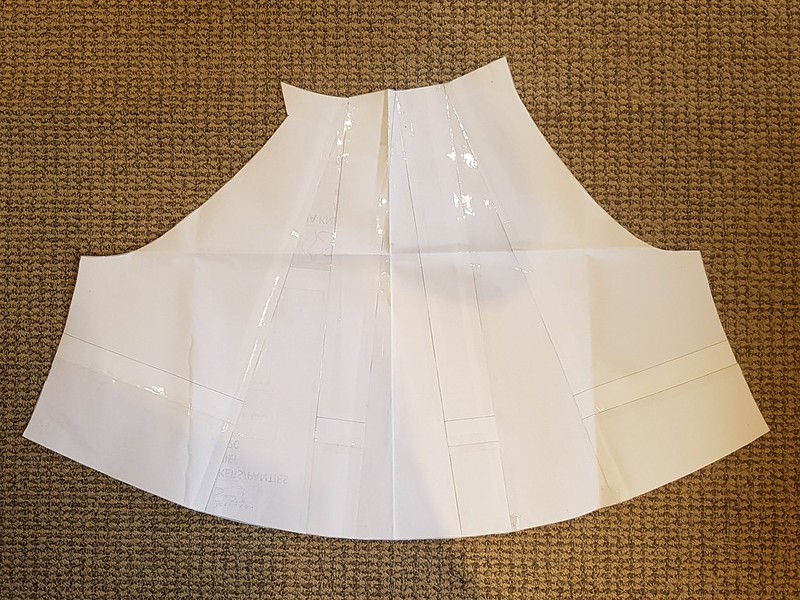 I traced the sleeve pattern that I already had, then slashed and spread it according to the tutorial. I think that I made the measurement from the armhole to the hem a bit longer than they’d suggested. The top in the tutorial has the sleeve ending above the elbow; mine is obviously below but part of that is related to the fabric type, elastic length and where the sleeve ‘cuff’ is pushed up to (or not) on the arm. 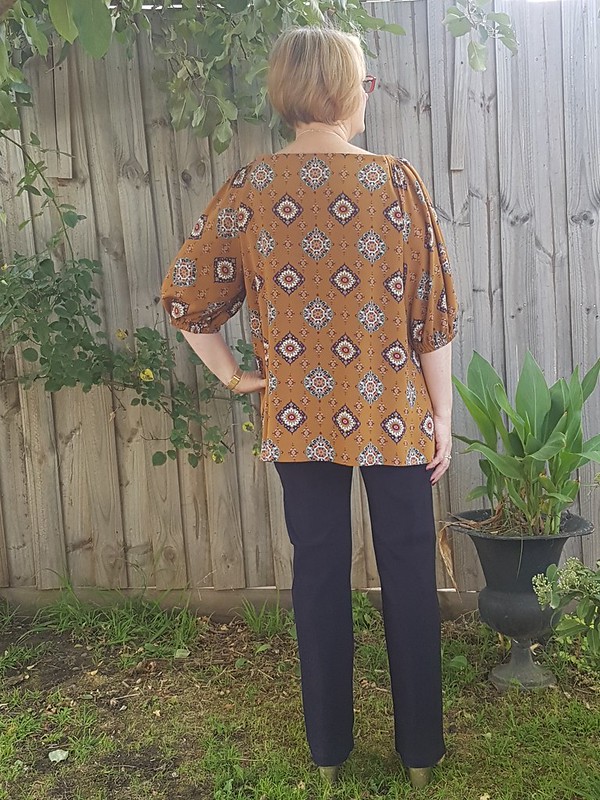 I also made some modifications to the body, and I’ll show you those pattern pieces too. I added length, added width at the hemline, and lowered the front neckline (and the corresponding facing) by an inch. My previous version was just too ‘chokey’. 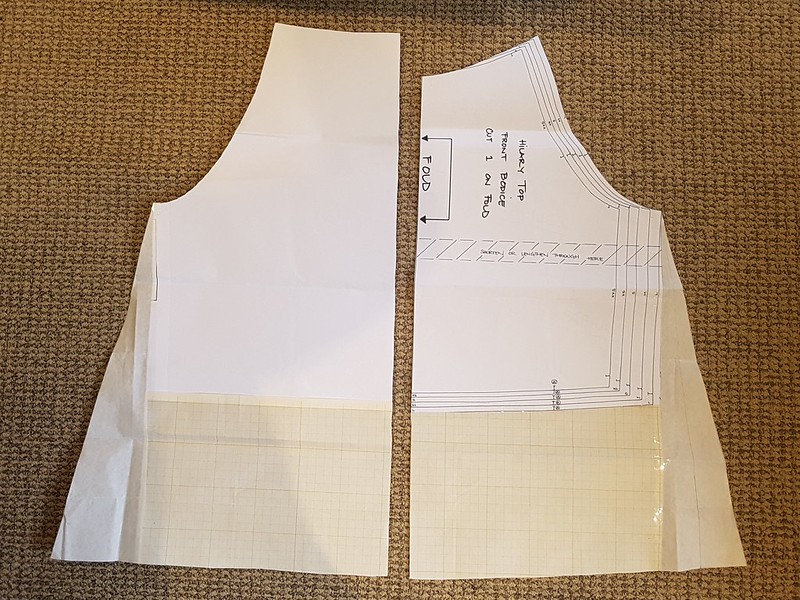 I wasn’t terribly scientific about the added width – I just measured out 5cm at the hemline, then another 5cm, and drew two lines that angled up to the armhole. Which line was used was likely to depend on what fitted on the fabric width. As it turned out I was able to use the 10cm line. This means that there was an additional 40cm added to the hemline width in total. I really like the way that it hangs and drapes at the sides. 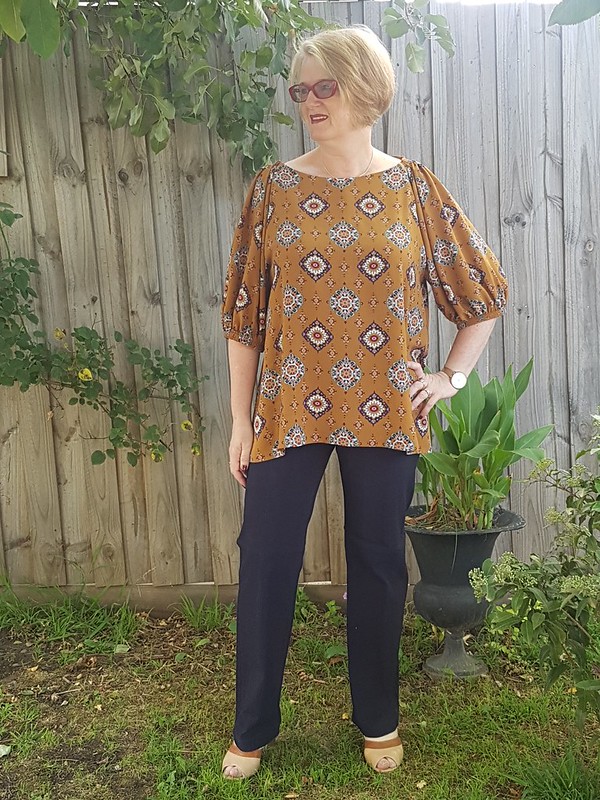 This top could do with some bra keepers being added right beside that wide neckline. I have fairly narrow and rounded shoulders, and prefer not to expose my bra straps. I sewed size Large, because that’s the pattern size I’d used before and was suggested by my bust measurement, but I really could have sewn this in a Medium. However, it doesn’t feel too big when I’m wearing it. 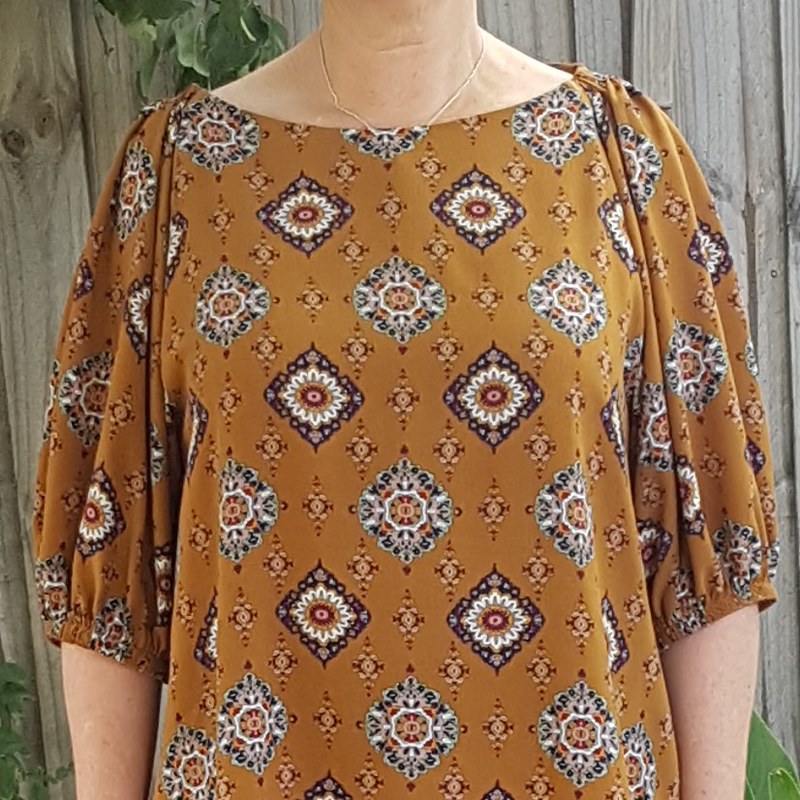 The elastic at the top of the shoulders does stand up a little from the body – I may have made the casing a smidgen too tight and/or used elastic that was a smidgen too stiff. But it’s not a deal breaker. For the sleeve hem elastic I measured around my upper arm to get a guide, then inserted it, then adjusted until the measurement felt right on me. I didn’t really want the elastic to be tight around my arm; rather, I wanted it to act as more as a cuff.

I am extremely happy with these pattern modifications.   I’ve now seen a few tops like this in the shops, and the recently released Friday Pattern Company Adrianna dress also has this type of sleeve treatment and a similar silhouette to my modified Hilary.  It’s not difficult to sew, yet looks a bit out of the ordinary.  I’d like to give this pattern one more go in something crisper to really get the boofy sleeve effect, but that will probably wait until next summer. There is already a to sew pile developing in my sewing room in anticipation of autumn and winter! 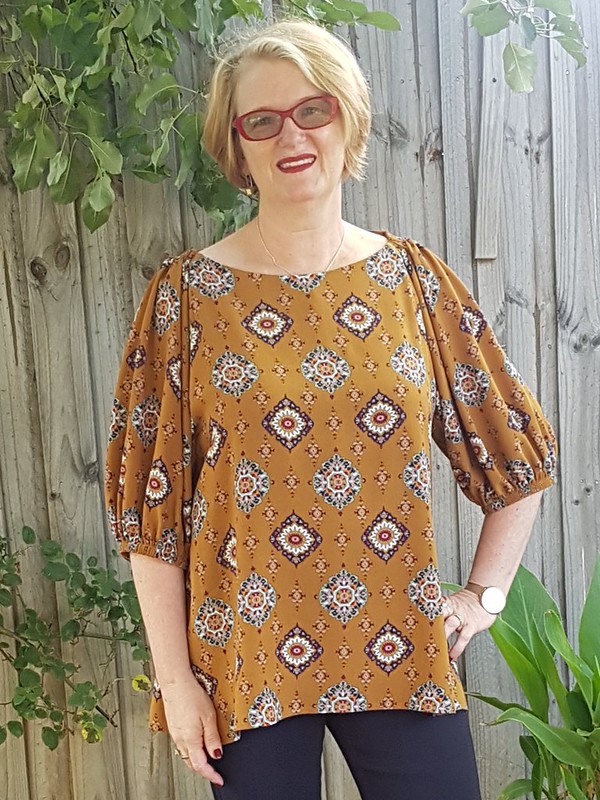