Sepilok is not far from Sandakan.  After our early morning flight we met up with our tour guide Mike and driver Jeffrey, and headed straight to the Orangutang Rehabilitation Centre. 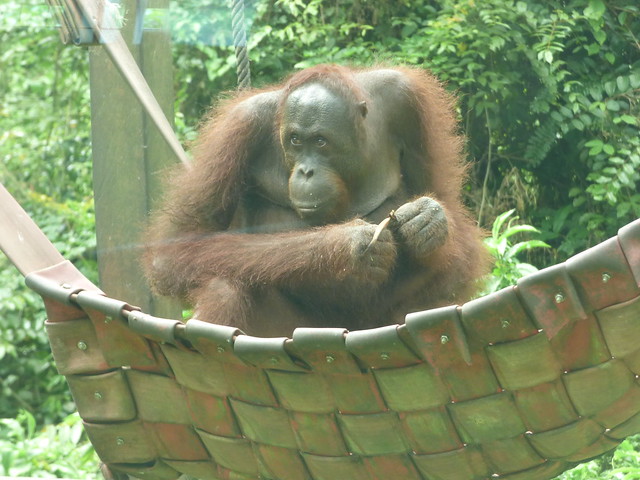 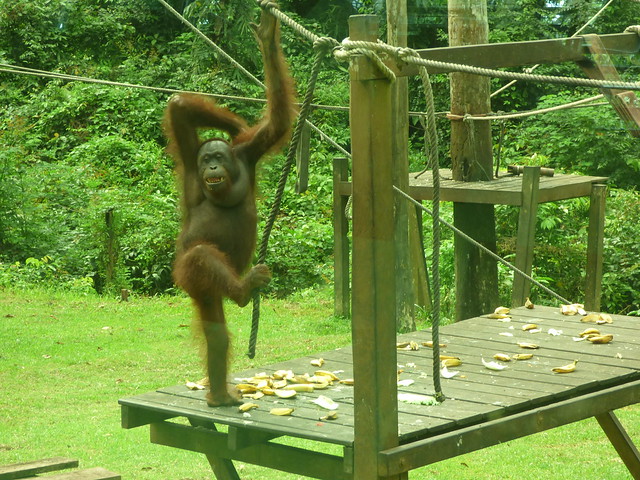 The first orangutang we spotted was right beside the raised boardwalk that led to the feeding areas.  We were ushered past that one quite quickly, with warning not to look him directly in the eye.  The orangutangs at Sepilok are semi-wild, in that they have been rehabilitated after being injured, orphaned or displaced, then released into the forest.  Food is provided twice each day, which prompts them to return to the feeding platforms.  However, it’s completely up to them – if there is plenty of food to be found in the forest they may not turn up at feeding time.  These animals are not caged (in fact, it’s the tourist who are behind glass in one area) so can go where they like. 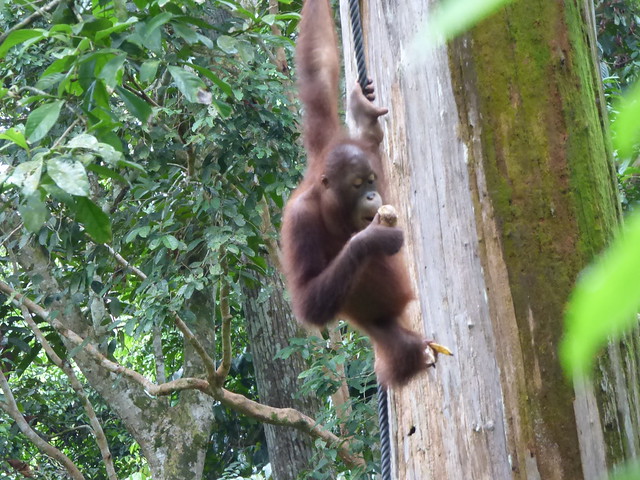 Of course, much of the appeal of watching the orangutangs lies in marvelling at the similarities in their movements, expressions and interactions to those of humans.  That’s in addition to marvelling at the ways they swing across ropes and branches, shifting from upright to upside down in mere moments.  There were many yoga-like poses, and playful wrestling between the younger animals. 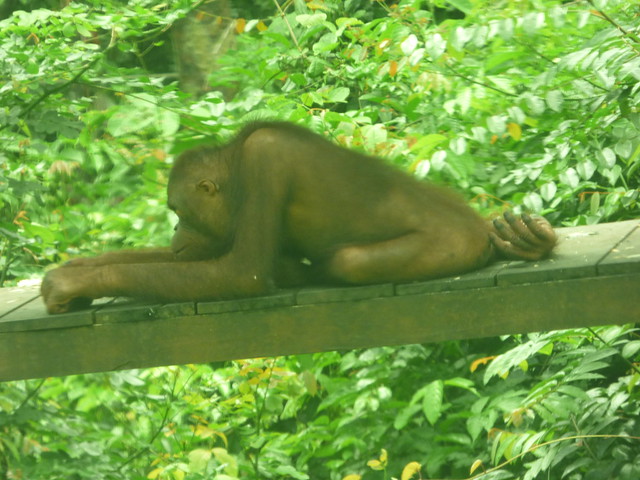 From the centre website: Sepilok Orangutan Rehabilitation Centre was conceived in 1961 and by 1964 had become reality, funded by the Sabah Government. The reserve is named after the two rivers flowing into the Sandakan Bay. The aim of Sepilok Orangutan Rehabilitation Centre is to return orphaned, injured or displaced orangutans back to the wild. Many orphans have successfully undergone the process of rehabilitation and have been released into the 4294 hectare Kabili-Sepilok Forest, a virgin jungle reserve rich in tropical rainforest and mangrove swamp. The rehabilitation process starts as soon as the orangutan is admitted to the centre with a thorough health examination, followed by a quarantine period to eliminate diseases being transmitted. Young orangutans spend their time in the ‘Nursery’ learning skills essential to jungle life, for example finding food, building nest and climbing. Once ready, they will move to the ‘Outdoor Nursery’ where freedom is increased and dependence on food and emotional support is decreased. Last but not the least, most animals achieve total independence and become integrated into the Sepilok wild orangutan population. 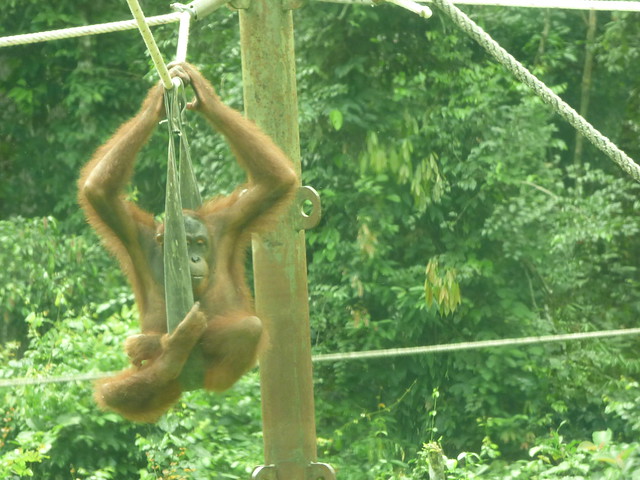 Wikipedia tells me this (and much more) about the orangutang: Orangutans are the most arboreal of the great apes and spend most of their time in trees. Their hair is reddish-brown, instead of the brown or black hair typical of chimpanzees and gorillas. Males and females differ in size and appearance. Dominant adult males have distinctive cheek pads and produce long calls that attract females and intimidate rivals. Younger males do not have these characteristics and resemble adult females. Orangutans are the most solitary of the great apes, with social bonds occurring primarily between mothers and their dependent offspring, who stay together for the first two years. Fruit is the most important component of an orangutan’s diet; however, the apes will also eat vegetation, bark, honey, insects and even bird eggs. They can live over 30 years in both the wild and captivity. Orangutans are among the most intelligent primates; they use a variety of sophisticated tools and construct elaborate sleeping nests each night from branches and foliage. The apes have been extensively studied for their learning abilities. There may even be distinctive cultures within populations. Field studies of the apes were pioneered by primatologist Birutė Galdikas. All three orangutan species are considered to be critically endangered. Human activities have caused severe declines in populations and ranges. Threats to wild orangutan populations include poaching, habitat destruction as a result of palm oil cultivation, and the illegal pet trade. Several conservation and rehabilitation organisations are dedicated to the survival of orangutans in the wild. 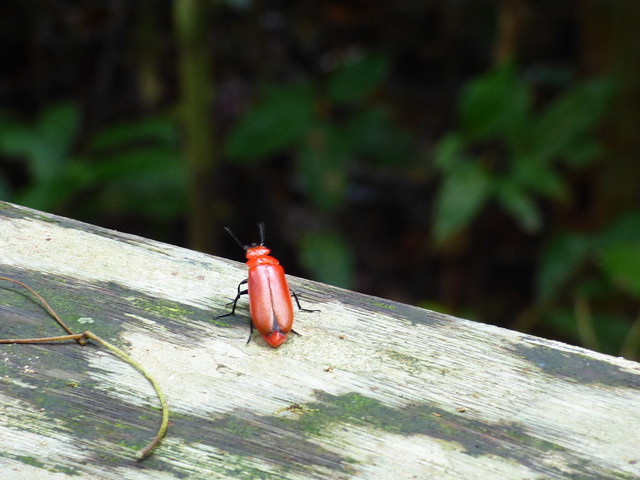 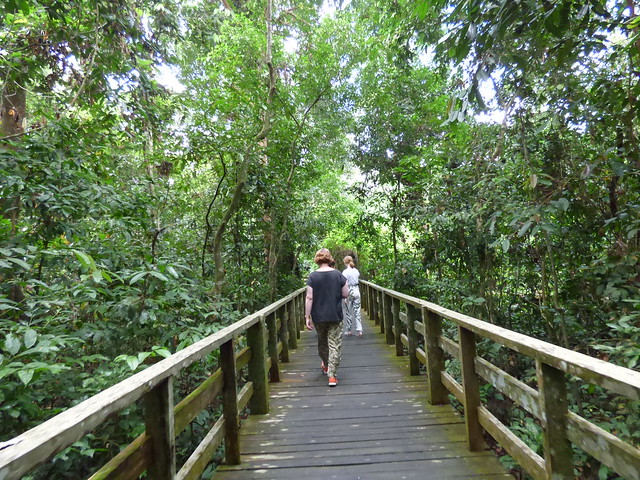 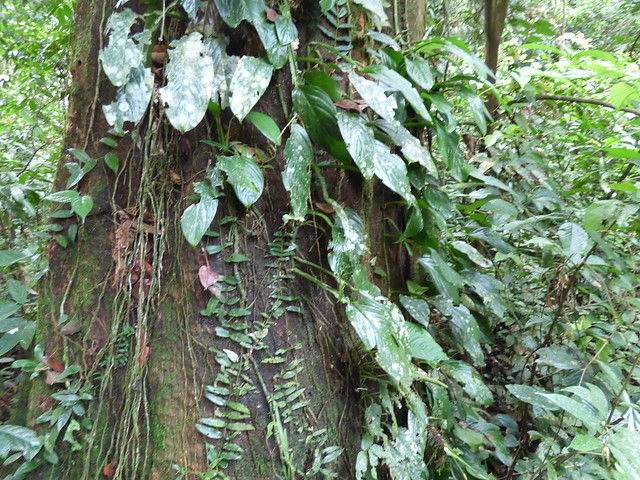 We were as interested in the rainforest/jungle that we were walking through as the animals, birds and other creatures we came across!  The variety of plants, the size of the leaves, the sheer height of the trees, and the amazing ecosystems that could be evident in each area. 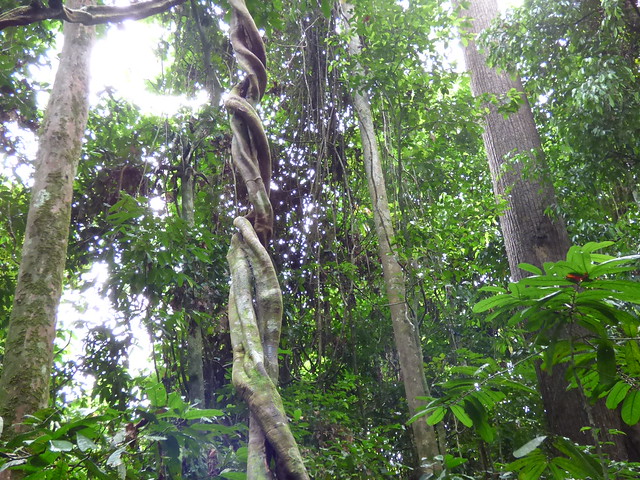 Directly across from the Orangutan Rehabilitation Centre is the Bornean Sun Bear Conservation Centre.  Malayan sun bears are the smallest bears in the world and are only found in Southeast Asia. These bears continue to be threatened by forest degradation, illegal hunting for bear parts and poaching to obtain young cubs for pet trade. The results of these threats has caused young sun bears found to be living in unnatural captive conditions in Sabah, with no access to outdoor areas. There are currently 43 rescued ex-captive sun bears residing at the BSBCC. The facility includes large forest enclosures to provide a natural environment suited to the needs and welfare of the sun bears and facilitate their rehabilitation back into the wild. 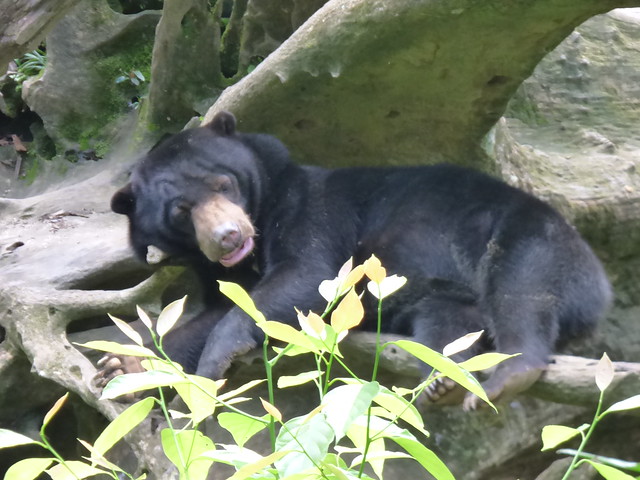 It constantly astounds me that people would try to make pets out of wild animals such as these.  It is of course illegal, and those found keeping endangered species as pets are fined, and the animals taken to a sanctuary such as this one.  The sun bear is the smallest, most arboreal and least studied bear. It is the second rarest bear species, after the giant panda. Their name comes from the pale horseshoe shape on their chests, which is said to resemble the setting or rising sun. No two markings are the same. They have a very long tongue at 20 – 25cm. This helps them extract honey from bee hives, earning them the alternative name ‘honey bear’ or ‘beruang madu’ in Malay and Indonesian. Sun bears live in tropical lowland forests and are the only bear in SE Asia. They are mainly diurnal and do not hibernate but build nests in trees to sleep in. They are omnivores and primarily eat invertebrates, fruit and honey. 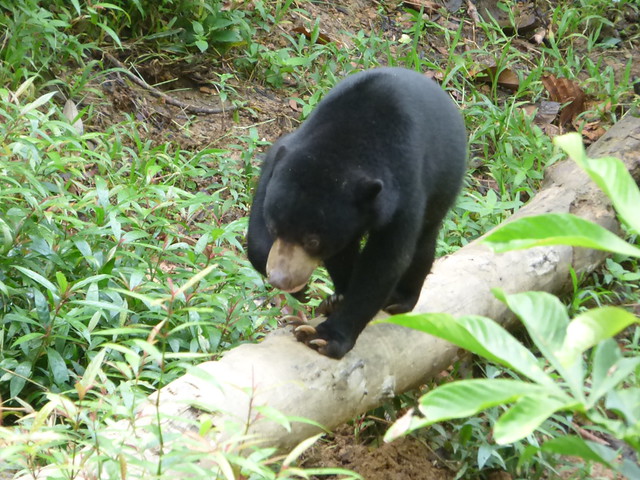 We checked in to our accommodation, Sepilok Forest Edge Resort, and enjoyed a delicious lunch for resting in our airconditioned rooms to escape the heat and humidity of the day.  Later in the afternoon we met up with Mike again to head for a walk through the jungle canopy at the Rainforest Discovery Centre.  This walkway took us about 40metres above the ground, where we tried to spot some of Sabah’s more exotic bird species.  And we were in luck! 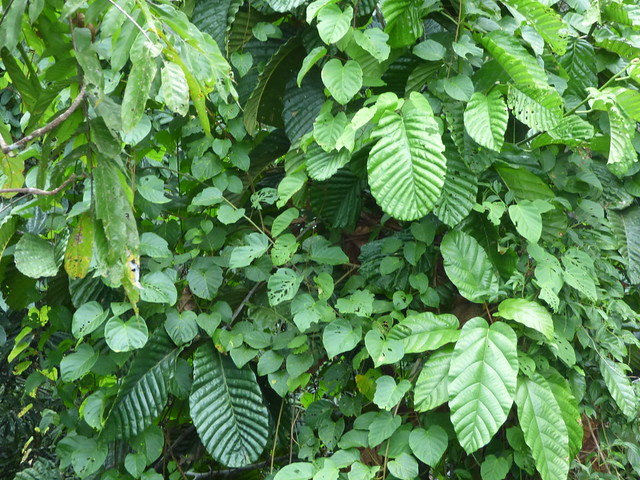 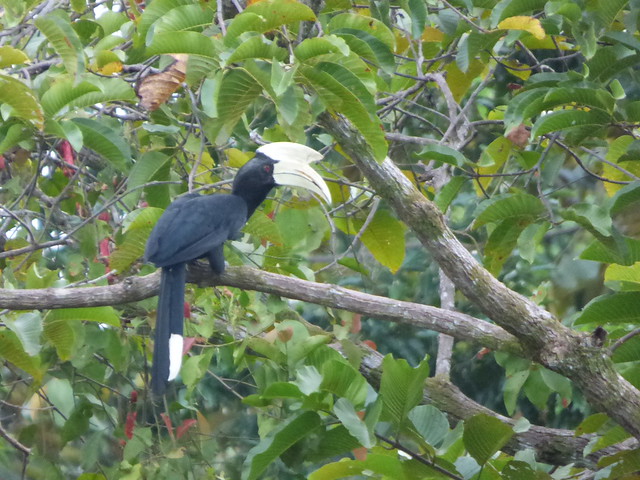 Firstly we found a hornbill!  There are 8 species of hornbill in Sabah.  This one is the Asian Black Hornbill.  We were very grateful for the zoom lens of our rarely used fancy camera, as well as sets of binoculars. 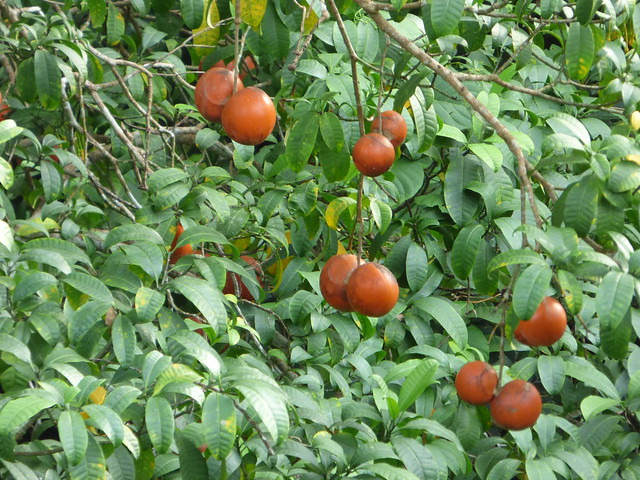 Next we were incredibly fortunate to have a pair of Rhinoceros Hornbills fly across and land in a nearby tree. The Rhinoceros hornbill is one of the largest birds in rainforests of Asia. They spend their entire lives on treetops. Found in primary forest throughout Borneo. Heavily hunted for feathers used in traditional ceremonies. Male has red iris and female white iris. They have a colorful red and yellow bill, with curling casque on top of the bill. The long white tail has a broad, black band near the center. Their wings beat ‘swoosh, swoosh’ are prominent when in flight. Call: a series of loud honks, barking-like call as the bird flies off. 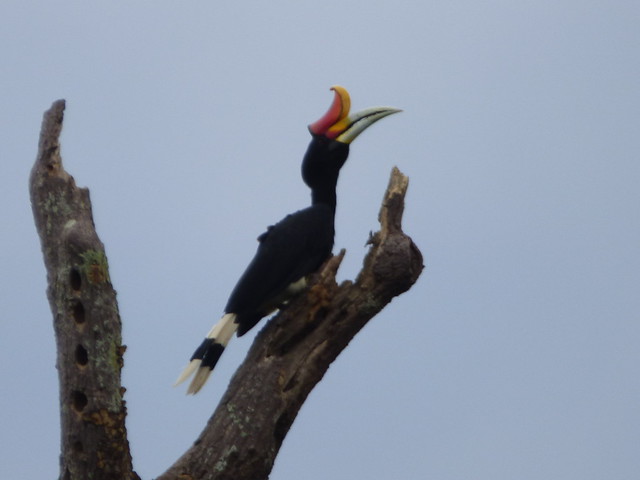 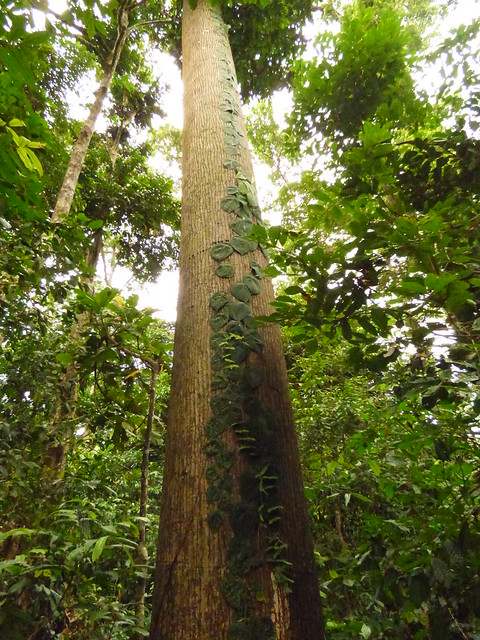 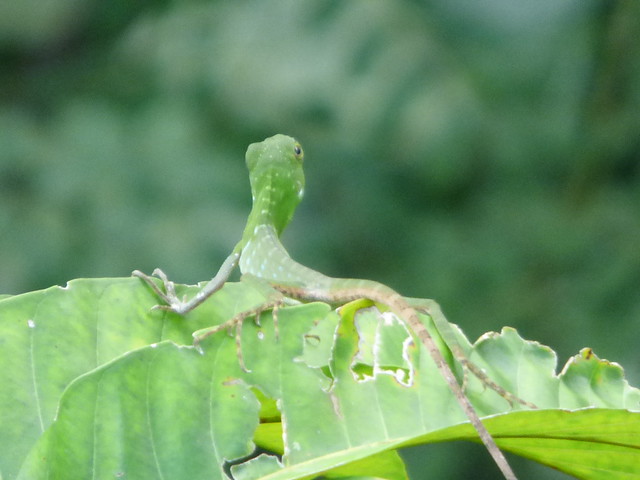 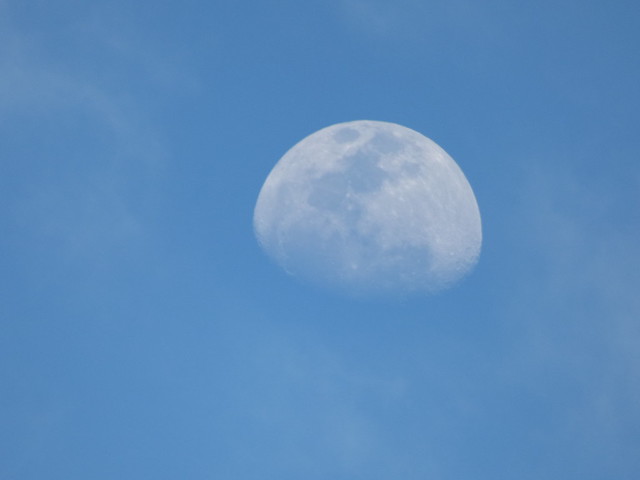 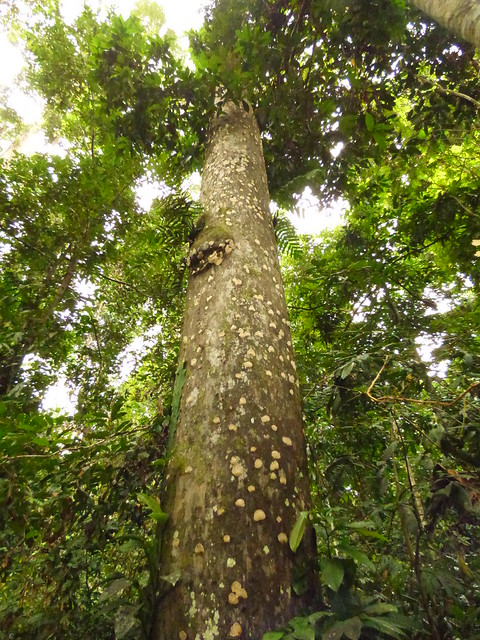 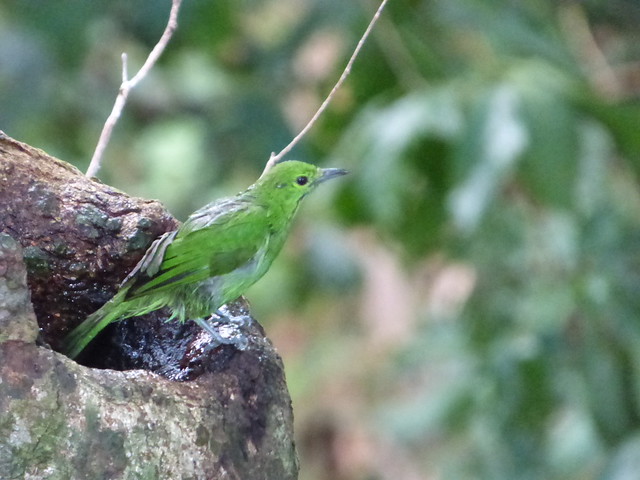 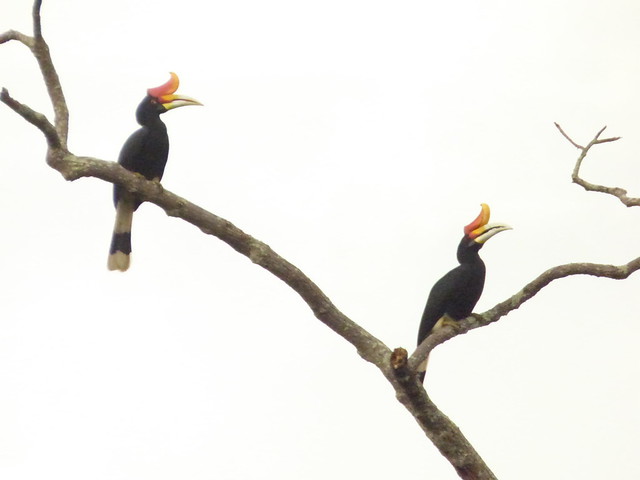 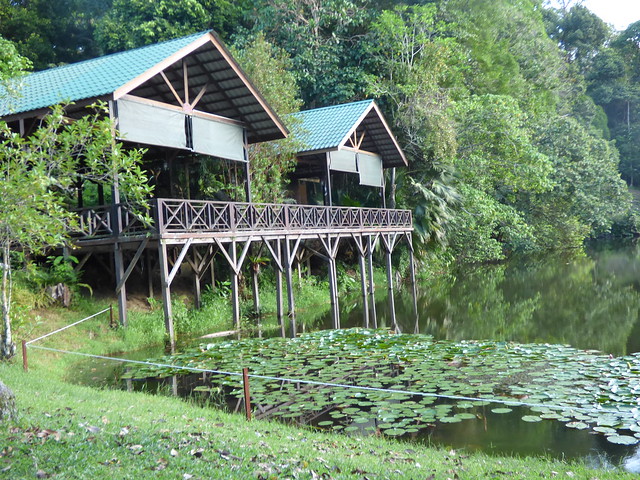 We are so fortunate to have Mike guiding us – he’s a wealth of knowledge, is obviously passionate about his job, and also has eyes that can spot all sorts of details – a clear advantage when trying to find wild creatures in the jungle!  Dinner last night was back at the resort, followed by a family swim before retiring for the night.  Today we’ll be heading off to Kinabatagan River, after a leisurely breakfast.