My lovely cousin Freya had a birthday back in January, and my gift was the offer to sew her a dress.  We went and bought fabric and pattern, I did a toile, cut out the fabric…and it’s still waiting to be sewn up. Yep.  It’s now September.  Whoops!  But I did sew her this one in the meantime. 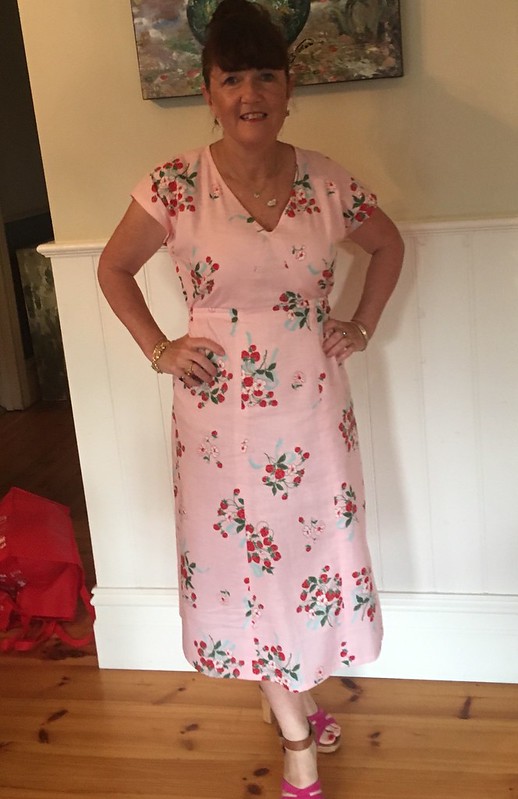 This is Simplicity 8231,  which is a collaboration between Simplicity and Sew House Seven (actually, the pattern is also available on Sew House Seven’s website as The Mississippi Avenue Dress and Top).  I chose the cap sleeved, longer length version to sew for Freya.

Now I’m trying to remember what size I sewed…I think it was straight size 14.  I eyeballed the pattern pieces and thought that they looked pretty small; I really didn’t think that they’d fit me, but Freya is smaller than I am, so I went with the 14.  Always remember when your’e sewing that although you might start choosing a size according to the measurements on the back of the pattern envelope, you really need to check the finished measurements (often printed on the pattern pieces) to determine what size to cut, taking your preferred amount of ease into account. 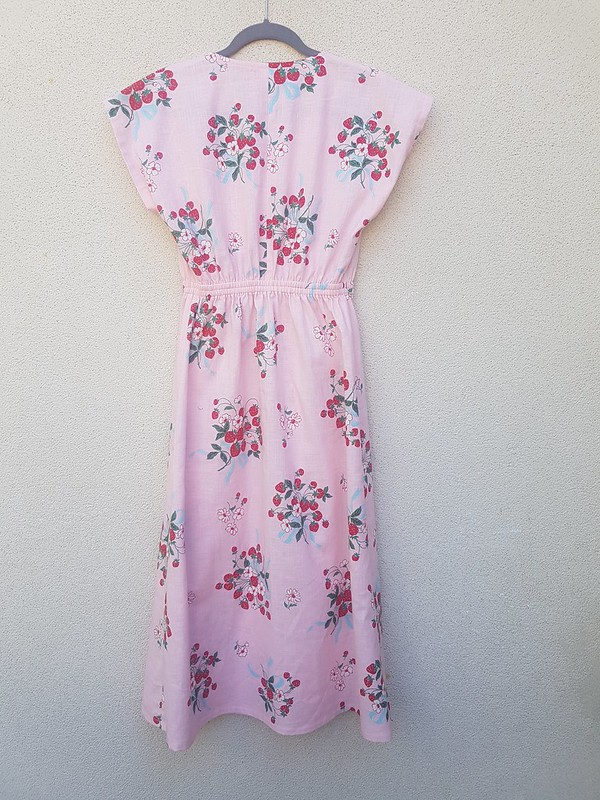 This dress is actually very easy to sew and quite straightforward to fit. The elastic in the back that extends around to the seamlines on the front allows for some variation in size. I can’t remember whether it was supposed to have a double channel for the elastic or a single one for wider elastic – either way, I think this looks pretty! 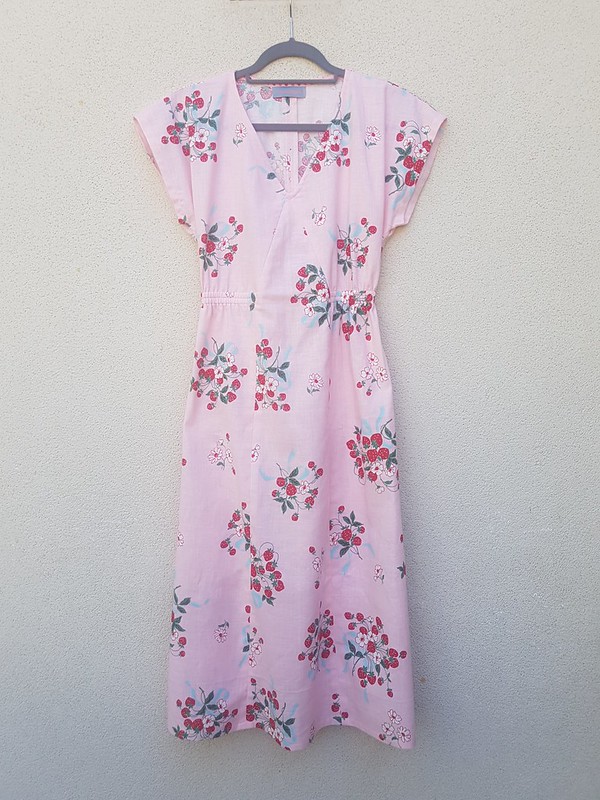 This fabric has been in my stash for some time. It’s a medium weight cotton, and the print is very Freya. It was very straightforward to work with, although the cut edges were a little prone to fraying. 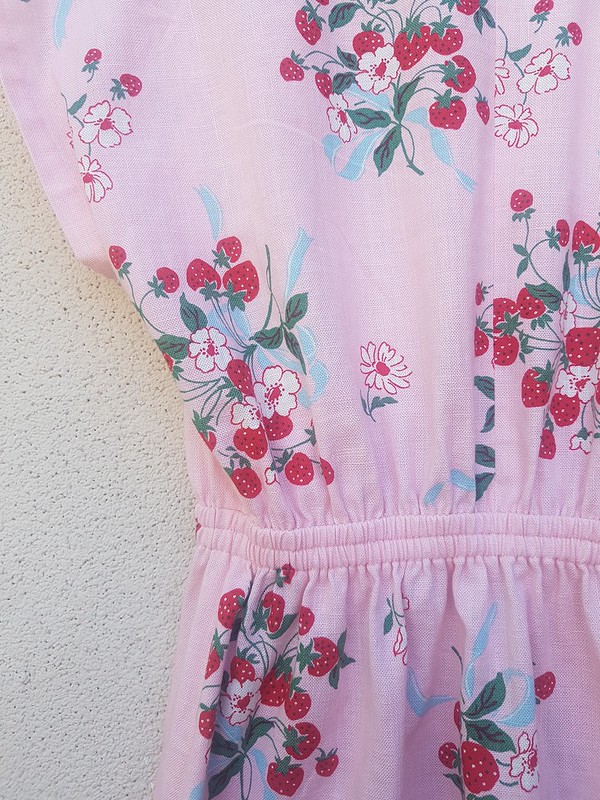 The neckline was finished a strip of bias binding (made from coordinating cotton I found in stash – I generally make my own bias binding rather than use purchased). It’s so long since I sewed this dress that I can’t actually remember much about whether the centre front V was tricky or not – which suggests that it wasn’t tricky, because I surely would have remembered if it was! 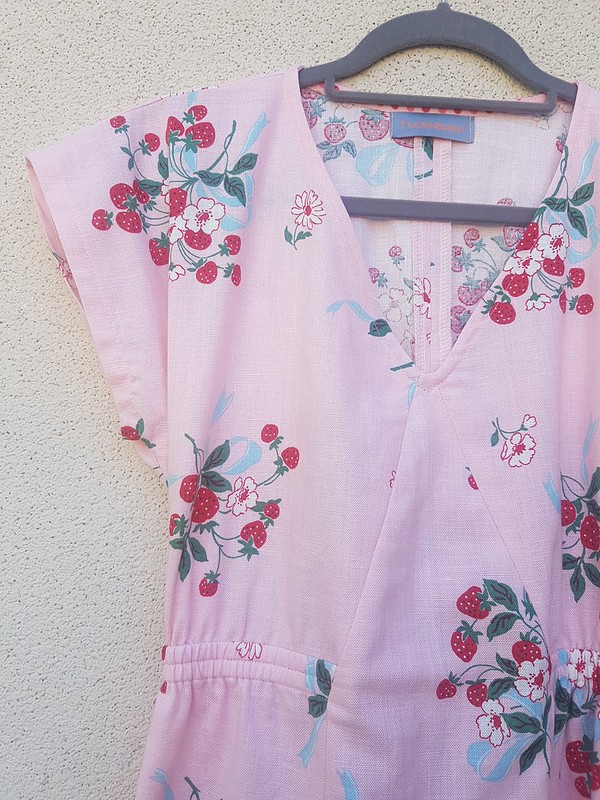 I was very pleased when Freya sent me photos of her wearing the dress. It’s always a bit of a gamble sewing for someone else without them available to measure or to try on as I go! Anyway, it looks as though it worked out just fine. 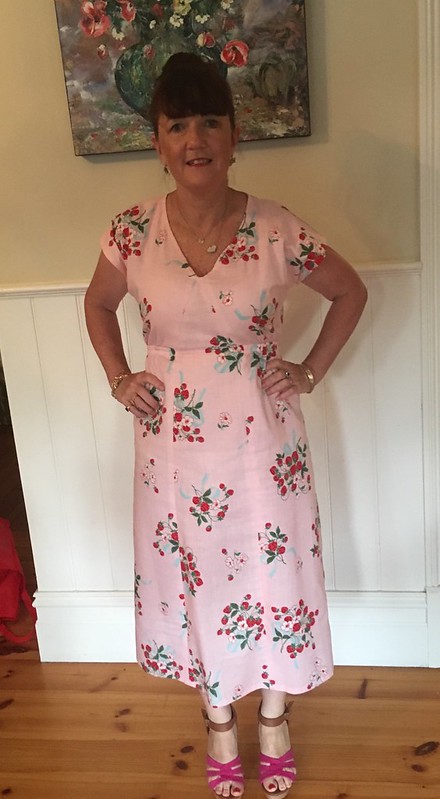 So, I’d better hurry up and get on to sewing the dress that was originally promised!