Sometimes garment pattern names provide me with interesting blog titles that are a little beyond the prosaic.  Ethereal and Swoon?  That provides for all sorts of mental images!  So here is the reality. 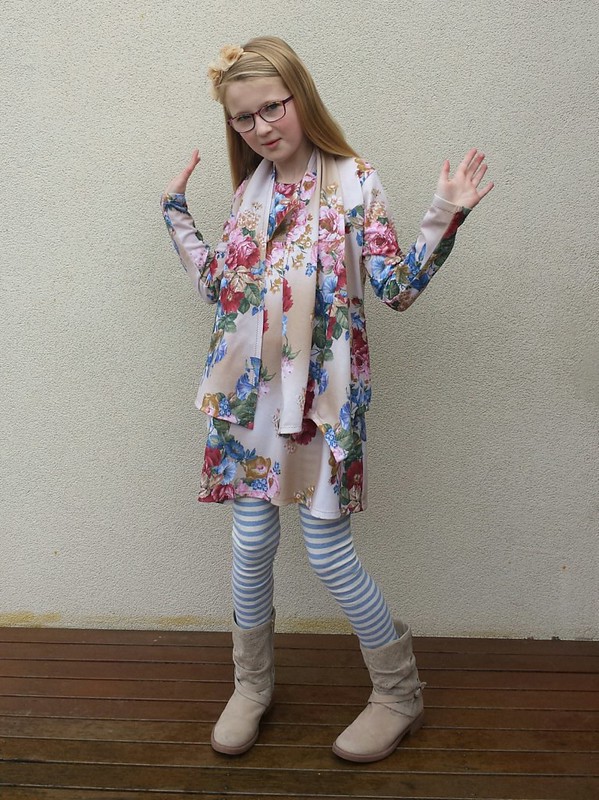 Both these patterns are repeats. The dress is the sleeveless version of the Figgy’s Ethereal dress, which I’ve made for Clare before here and for Stella before here. I left out the buttoned opening at the back and simply cut it on the fold. 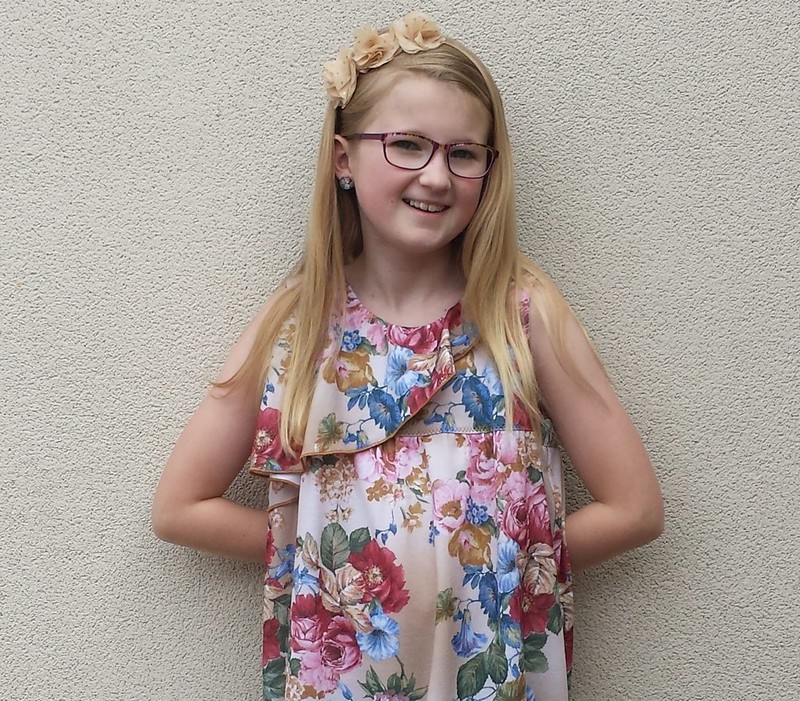 Size wise, this is the largest size that the pattern goes up to, which is the 8/9 years. There is plenty of width in it, and both the bodice and skirt length could easily be altered for a larger size. Clare is 11 and a half years old now. We cut the skirt to the second longest length, which I think is meant to be roughly knee length. It’s definitely above her knees, at a length that she rather likes. 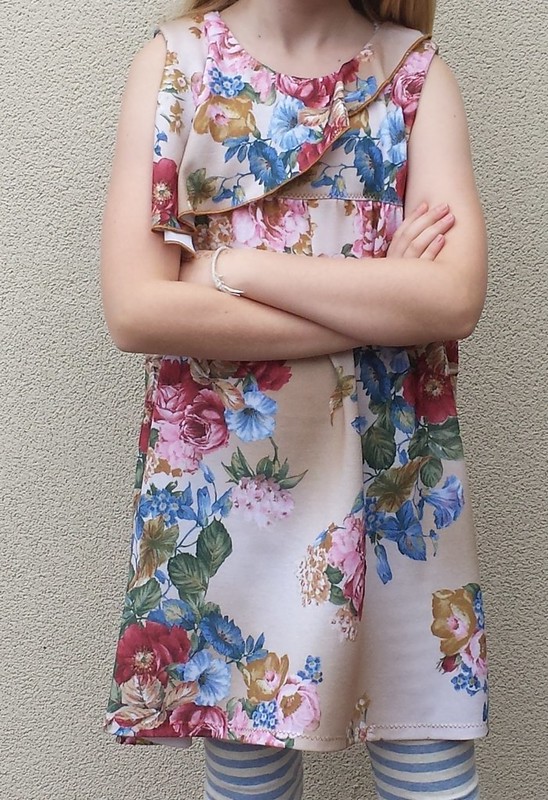 The armholes are rather low, so be aware of that if you are making it. Not too low to wear, but they do show her camisole underneath. I used the zig-zag stitch on my sewing machine to hem the dress and secure the bodice lining around the raised waistline seam. Construction was shared between the overlocker and the sewing machine. The edge of the bodice flounce was roll hemmed using the overlocker, in a contrasting mustardy shade. 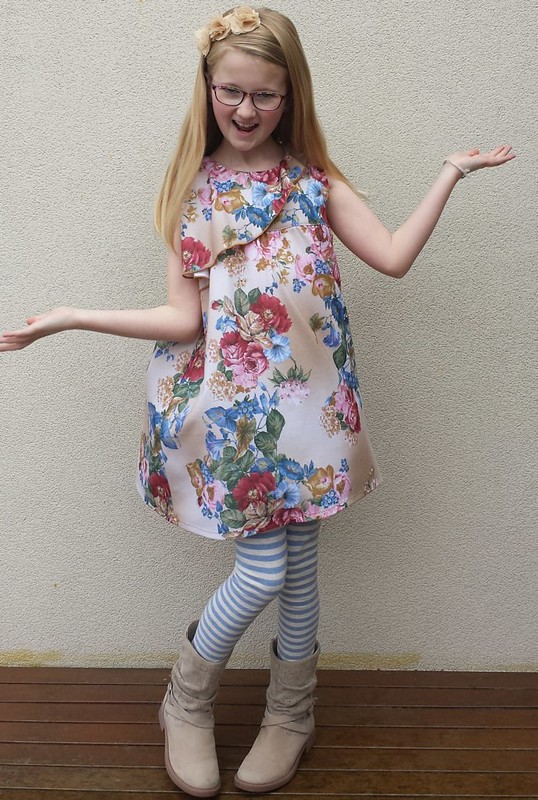 The jacket is once again the Swoon Patterns Scarf Neck Cardigan. Construction was entirely on the overlocker, although hems were turned once and secured with a zig-zag stitch on the overlocker. 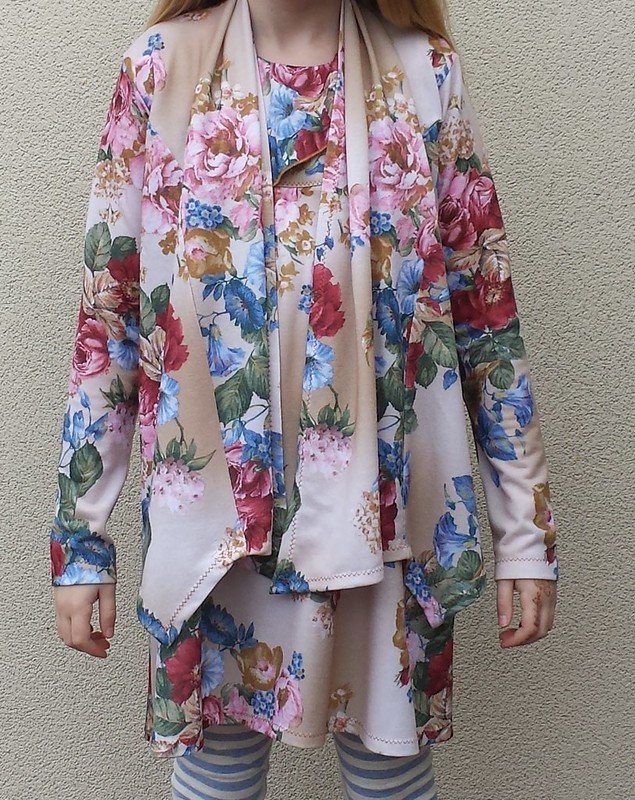 This is also the largest size, which I think is a 9/10. Plenty of room for winter and possibly also for next. Clare really likes these cardigans – she wears the other one frequently and this one is also entering into high rotation. She likes it with jeans too. Clare sometimes wraps it around and tucks it at the edges for a different look, but it mostly just hangs free. 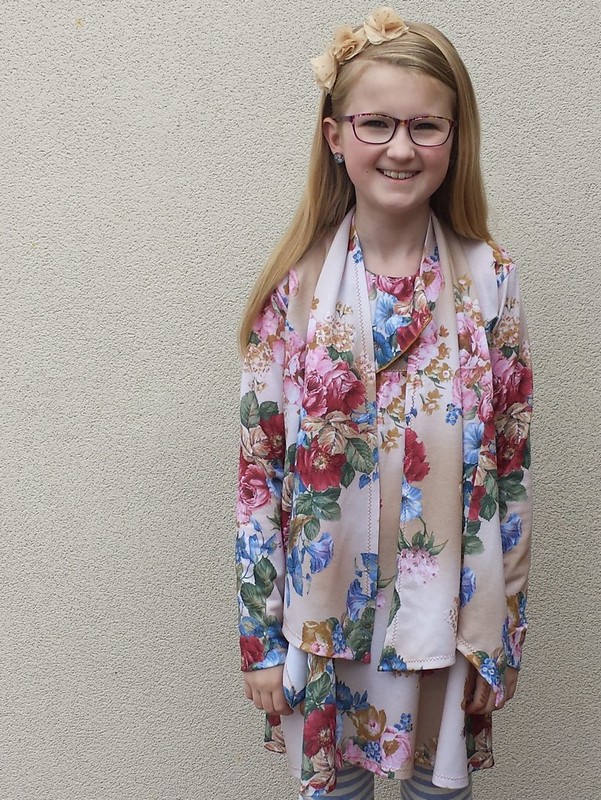 The fabric is from Darn Cheap Fabrics, from the $2 per metre table. I passed it over the first time I spotted it, because it’s not something that I would wear, but then I reconsidered it for Clare. And as it turns out, Clare really likes it! It’s a knit, probably acrylic, and fairly stable. Once again, not the type of fabric recommended for the Ethereal dress, but it works. 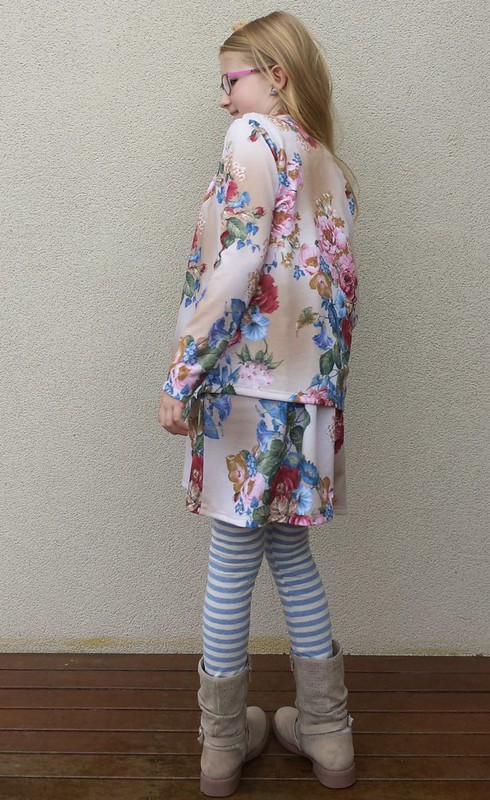 You’ve seen the striped leggings before – they are from the Go To Patterns Leggings pattern. I rather like the way that Clare has styled this outfit – maybe a little influenced by our attendance at the screening of Pretty In Pink that was recently held at the Westgarth Cinema. (Clare really enjoyed the movie, but did giggle often because there was “lots of kissing”). 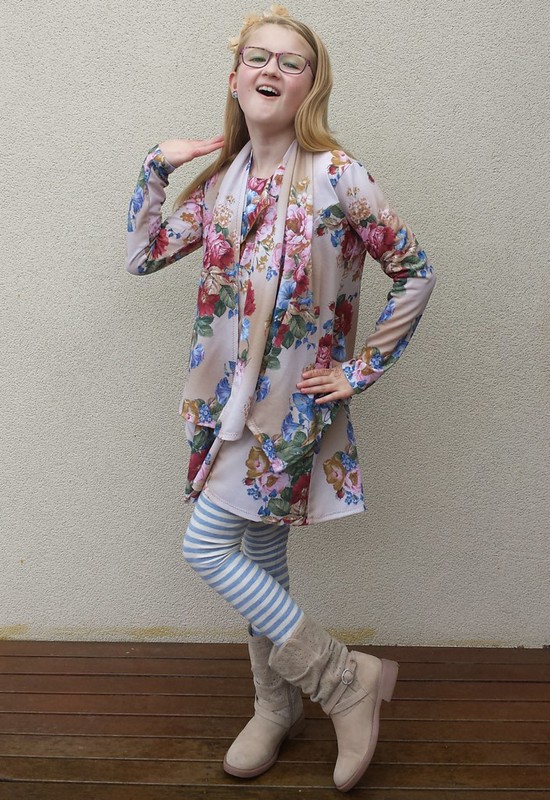 This is the last garment that I have planned for the girls for a little while. Although there will be a Grade Six graduation dress to make for Clare soon, and Christmas dresses won’t be far behind. It’s a good thing that I enjoy sewing for them!

11 thoughts on “Ethereal and Swoon”