Oh my, the sewing machines were running hot around Australia during the Queen’s Birthday Long Weekend, for the deadline of the Tessuti Jaywalk Competition is tomorrow.  And we all want to win $1000 of Tessuti fabric.  Photos are popping up on the competition Pinterest Board at a rapid rate, and there are some seriously fantastic garments to see!  I generally don’t enter sewing competitions and the like.  My ego is too tender, and I don’t really like sewing to a deadline.  But when the competition was announced with such lovely fabric at a vastly reduced price, I couldn’t resist. 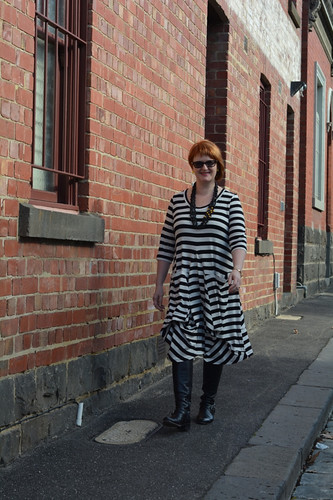 So, here I am in Vogue 8975! I had it cut out weeks and weeks ago, but it was only sewn up yesterday. Nothing like a deadline to give me that final push! Anna offered to be my photographer, so all the terrific photos are due to her skills and fancy camera. A little different to the usual ones from the 11 year old daughter (or the unenthusiastic husband) using the camera in my phone…. 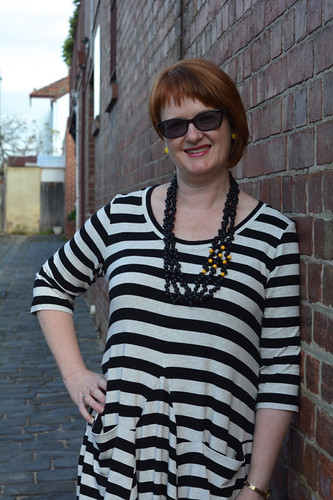 There is a whole lot that I like about this dress. Firstly, the fabric. It’s a viscose/spandex and has such a divine hand. It’s fairly weighty, so hangs beautifully, and was very straightforward to sew. I have a little left of the black/natural colourway, and a metre or so of the pale ecru/natural colourway. Originally I planned to enter more than one garment in the competition. Well, that didn’t eventuate. I still have plans for the remaining fabric (actually, I wish that I’d bought more) that involve doing some fancy things with tucks along the stripes. 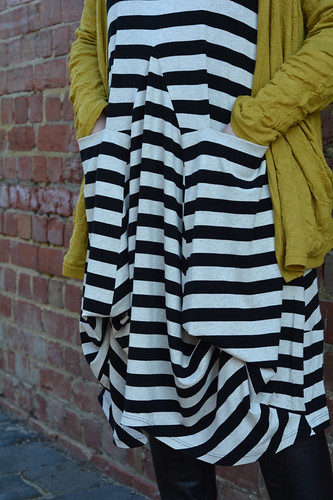 The next thing that I love about it is the pockets and associated drapes. The construction really is rather ingenious. Marcy Tilton is so clever! I have no idea how she designs these types of garments.  The pockets and drapes all join and fold and tuck and none of it is hard to do, but you end up with this marvellous effect at the front. Whereas the back is all pieced, but the shapes of the pieces meant that none of the stripes could match up exactly all the way along any of the seams. The jagged effect created along the seamlines in conjunction with the strong contrast of the stripes is really interesting to me. 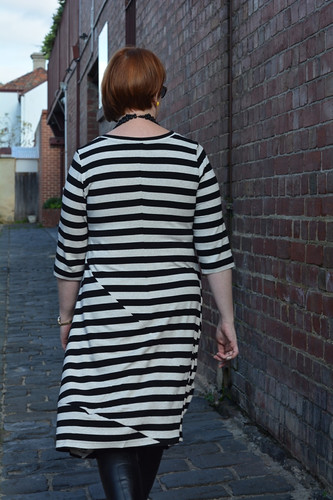 I did however match up the stripes along most of the centre back and along the sleeve seams, and all the stripe placement elsewhere is perfectly symmetrical. Go me! 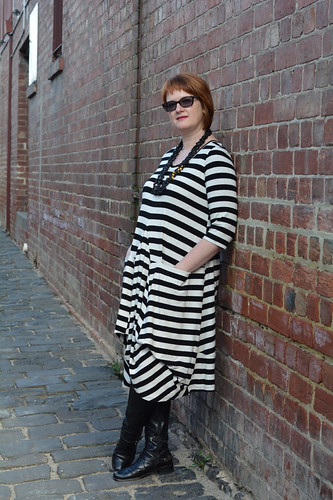 The sewing machine and the overlocker were both used in construction, with many of the seams stitched first on the machine before finishing the edges with the overlocker. Both the shoulder seams and the neckline were stabilised with fusible tape before sewing seams together. Hems were secured with one inch wide vliesofix tape before stitching with a twin needle. I also topstitched around the neckline with the twin needle. 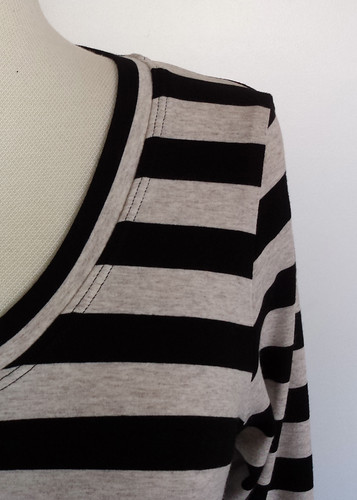 Size wise, this is size Medium. I made all my usual short waist adjustments by folding around an inch and a half out of the bodice pieces before cutting it out but no other alterations. All the pattern pieces fitted together beautifully and the finished dress is one that I know I will wear again and again. 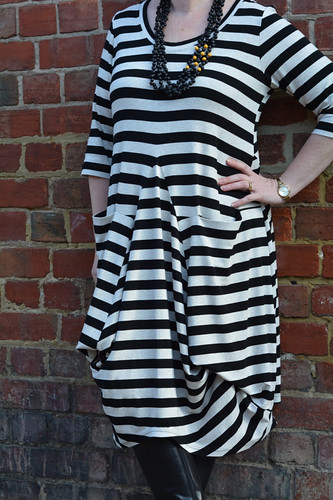 The only thing that I would do differently if I made this dress again would be to add some fusible interfacing at the centre point in the front. Although there is a line of stitching to reinforce that area, the fabric is relatively heavy, and there is quite a lot of fabric in the skirt to weigh it down. It’s not pulling a great deal, but a little more stability there would have been preferable. Actually, there is one other thing I would have done differently – it would have been fun to have cut some of the sections on the cross grain to play even more with the stripes.  There is plenty of stretch in the fabric and that probably would have worked beautifully.  The pattern drawing and cutting layout does suggest using a contrast!  Ah well, there’s always next time. 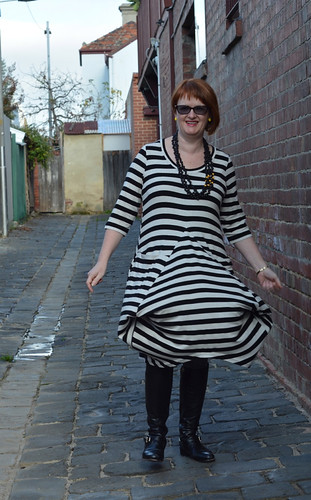 Check out how this dress twirls – it shows you how the front drapes connect in behind the bottom of the pockets on the inside of the dress. And I like the weird effect that photographing the stripes gives. 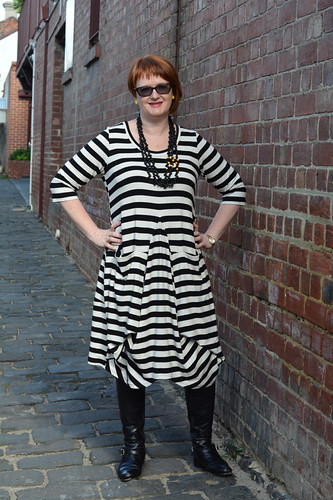 Do make sure that you check out all the competition entries. The variety of styles that people come up with for the same fabric are amazing. It’s been fun to take part.